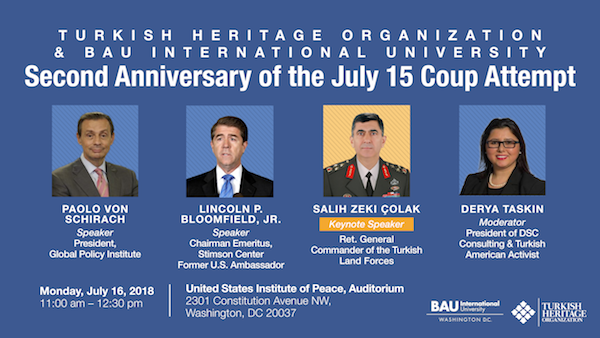 Yesterday the Turkish Heritage Organization and BAU University together marked the second anniversary of the failed coup attempt led by Fetullah Gülen in Turkey with a public discussion in downtown Washington, DC, attended by members of Amsterdam & Partners LLP.

Despite two years of recovery, the deep trauma and wounds sustained by Turkish society still aches – an event which hangs over the national memory much like 9/11 for Americans.

Throughout yesterday’s event, speakers emphasized the necessity of a renewed collaborative commitment from Turkish and American leadership in order to effectively neutralize the Gülen threat. Accordingly, Turkish Ambassador to the United States, Serdar Kiliç, and former U.S. Ambassador Lincoln Bloomfield attested to the complexity of this objective, while maintaining the necessity for action on American soil, in addition to ongoing processes in Turkey.

As a whole, yesterday’s speakers made their interpretations of the Gülen movement clear, that the false cleric based in Pennsylvania, and his allies, are indisputably sophisticated and well resourced adversaries determined to destabilize Turkey’s national security, Turkish democratic continuity and myriad other geostrategic objectives shared by Washington and Ankara.

According to the keynote speaker, Retired Turkish General Salih Zeki Colak, a complete recovery from the 2015 coup attempt will require “more U.S. policies to combat institutionalized terror organizations like FETO,” among other preventative measures. To accomplish this, the ongoing investigations by the IRS, DOJ and FBI must be supplemented by bilateral cooperation between the intelligence communities of Washington and Ankara.

From the U.S. standpoint, the incentives are clear. By not eliminating the Gülen threat, U.S. taxpayer dollars will continue to illegally fund this international organization (certainly party through their vast network of charter schools, which our firm has investigated), and as a result, the U.S. will find itself without a secure and stable ally in Ankara.