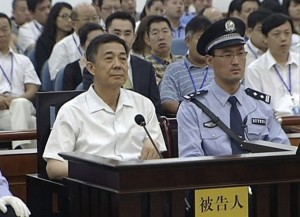 The recently concluded trial of former top party official Bo Xilai has offered us a unique glimpse inside the little-understood world of Chinese power politics. Far from a typical open-shut Chinese trial, the party leadership was clearly seeking to accomplish something beyond its predetermined verdict with this carefully scripted performance.

Officially, Bo was charged with abuse of office and taking some $4.4 million in bribes during his earlier tenure as mayor of Dalian ten years ago. However, his epic fall from the heights of power was triggered by the alleged cover up of the murder of British businessman Neil Heywood, for which Bo’s wife, Gu Kailai, has already plead guilty.

Whereas most Chinese trials are closed to the public and media, Bo’s trial was practically aired live on social media – with a few exceptions of censored transcripts. The brash populist was seemingly allowed to speak out against the allegations and attack his accusers, however he was not allowed the opportunity to choose his own lawyers.

As a lawyer who has participated in a number of political trials, the case of Bo Xilai is one of the most interesting events in recent memory. The party managed to pull off something that looked, felt, and smelled like some sort of exemplary anti-corruption trial, replete with dramatic testimonies of sex, betrayal, and greed. And yet, the whole production was thoroughly bereft of any rule of law or due process. As Andreas Fulda commented in the Guardian, despite the stagecraft, a single political entity continues to play the role of “enforcer, prosecutor and judge.”

However if the goal of this experiment of quasi-transparency were to publicly destroy Bo’s popularity and shore up the authority of his rival, current President Xi Jinping, it did not succeed. As with many other show trials, by attempting to imitate legal process, the authoritarian state inadvertently ends up putting itself on trial.

Bo is clearly the product of a system, and his willingness to go along with the show exhibited at least in part a continuing loyalty to that system. Rather than focusing on the sensationalist details of infidelity and corruption, many analysts watched the trial for what was censored – such as which orders came down “from above.” By stripping out any mention of politics from this extremely political trial, it has become near impossible to separate the actions of an individual and the conduct of the system itself.

While the party elite is seeking a harsh sentence, they are constrained by several factors. Some say they are not prepared to go too far in terms of punishment for a top-level official, lest they find themselves in the dock one day. Has the memory of Deng placed limits on top-level discipline?

When the Russian ideologue Nikolai Buhkarin spoke out at his own show trial, he knew death was imminent. In Bo’s case, he can now almost be certain that punishment will be lighter. The prosecution was weak to the point of appearing choreographed, while other sources say party officials are worried that Bo could even make a political comeback. By having granted him a platform to attack his accusers, the state will not be able to legitimately pass down an overly harsh verdict without a negative public response.

In many ways, the whole process has been emblematic of 21st century show trials, as the government is caught flat-footed, unprepared, and certainly less able to control the narrative as it spread through social media channels, open to much more interpretation, speculation, and analysis than could have been foreseen.

Authoritarian governments like control and predictability, and the Bo trial was anything but. It is hard to say if this event has created a public expectation for more openness in the anti-corruption process, but undoubtedly if given a choice, the party would not do it this way again.