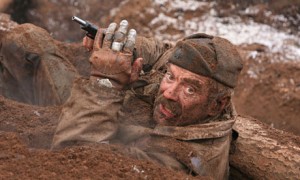 Nikita Mikhalov’s Burnt By The Sun won best foreign film at the 1994 Oscars, the Grand Prix at the Cannes film festival and was feted internationally for its epic portrayal of a Red Army Officer struggling through the Great Purges of the 1930s.  Burnt by the Sun 2, Citadel, was almost panned by many critics and sunk at the box office, winning the unenviable title of the country’s biggest box office flop to date.  Unsurprising therefore, that many film pundits are wondering why the latter has been chosen to represent Russian cinema at next year’s Oscars.Politics, many say, is at the heart of.  Mikhalkov, they argue, is thick as thieves with the Kremlin.  He has been excoriated on several occasions for alleged abuse of his ties to Vladimir Putin, be it due to speeding round Moscow or landing shady construction contracts like an inveterate member of the ruling elite.  One industry figure in particular is leading the vanguard of the attack on the cinematic titan; Oscar committee head Vladimir Menshov, who refused to sign the document confirming that the film would be submitted, thus sparking the controversy.  The Guardian has some of the details:

The Russian daily newspaper Moskovskiye Novosti described the decision to pick Citadel for the Oscars as the triumph of “cronyism” over “common sense”. Mikhalkov has strong ties with the Russian political establishment and has been photographed taking tea with Vladimir Putin, for whom he once filmed a tribute movie to celebrate the prime minister’s 55th birthday. He heads the state-backed union of cinematographers and held the premiere for the first part of Burnt By the Sun 2: Exodus, in the Kremlin.

With a combined budget of at least $40m, Burnt By the Sun 2 is the most expensive Russian film of all time, but neither Citadel nor Exodus performed at the box office, with hauls of $5m and $7m respectively. Critics accused Mikhalkov of deliberately crafting his two-part tale of life and death on the second world war’s eastern front in a form pleasing to Russia’s political establishment and described the acting performances as poor