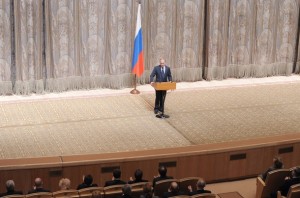 In any genuine protest movement, there comes a time when the establishment is forced to decide how to acknowledge it internally and externally.  That may have finally happened in Russia this week, as Vladimir Putin went on the attack against the polyglot protest movement with a new narrative.  Instead of dismissing the movement as foreign-funded agents as usual, Putin addressed the movement from a campaigning perspective, alleging that the movement lacked both a concrete agenda and a credible leader that can achieve something “concrete.”

This shift in tone – despite the fact that Putin is still speaking out both sides of the mouth – is very meaningful.  Throughout the course of Vladimir Putin’s very long political career, he has never been burdened with the labors and occasional indignity of a genuinely competitive campaign.   Now, for the first time, we are hearing arguments from Putin as to why he is still needed, representing a tectonic shift from 2007 Duma elections based on the breathtakingly empty platform known as “Putin’s Plan.”

We take it for granted that Putin is a skilled politician.  He can address the public through forums such as the Valdai Club and the annual telephone Q&A for hours on end, delving into deeply specific details and knowledge of policy subjects that would be impressive in any democracy.  He likes to boast his “common touch” through dressed down publicity stunts, rubbing elbows with working people sans necktie.  Over the years he has participated in quite a number of events and activities that bear considerable similarity to the life of a politician, and yet, there has never been any real competition and therefore nothing at stake but performing a role in a theater production.  The truth is that nobody knows how Putin would fare in a competitive system, when insults are hurled, vanity is mocked (he has a known intolerance for satire), and fickle public support can surge and recess faster than gaffe soundbyte.

Many people think that the protests are going to wilt over the short term.  Russia has just begun its annual two-week long alcohol-soaked holiday, while at the same time the Kremlin is kicking the counter-revolution into high gear.  The above-quoted messages from Putin are making their way through the state’s echo chamber, and judging by current trends, these narratives will be seeded and nurtured into firm perspectives within the next two weeks.

What is being said over the holiday provides a preview of the upcoming presidential campaign rhetoric – and apparently the Kremlin’s strategy is “Our Brand Is Crisis.”  The argument being that without Putin, there is a total vacuum of leadership in the country, prompting a massive crisis and threat to national security should he be dislodged from power.  This myth that Russia’s power structure is too engrained to risk alteration is catching on, as Michael Birnbaum of the Washington Post recently dedicated significant space to the topic, focusing on the choice of Yabloko to nominate its perenial lame duck Grigory Yavlinsky as opposed to Alexei Navalny, minted as the “galvanizing force behind the protests.”

The state is working to take over the language of the protests, doing what is possible to confine them to limited messages.  Alexei Mukhin, director of the Center for Politial Information think tank, has identified the new meme: “’Russia without Putin’ is the strongest slogan, but it is at the same time the weakest one,” Mukhin told The Moscow News. “Because the answer is: ok, Putin, leaves, and then what?”

Vladimir Burmatov of United Russia has already chipped in, telling RIA Novosti “The protest has absolutely no leaders as they do not recognize each other. What can we talk about, if they cannot even agree on how to call their protest movement?”

Andranik Migranyan, who works for a front NGO funded by the Kremlin to monitor democracy and human rights in the USA, is emphatic in driving home the new narrative.  The current government is institutionally strong, fearless of the protests, and popularly supported; the opposition “has not offered an alternative program for the country beyond its desire to upend Putin”; and lastly, and perhaps most importantly, the protesters are dangerous “Gorbachevian” radicals who are seeking revolution.  Migranyan also argues that there’s no point to re-do the widely discredited elections, because opinion polls show about the same outcome.  (A recent Huffington Post article by Simon Shuster points out that Russia might be able to use the protests as a pretext for a state of emergency.)

In addition to mythologizing the protest movement as being 1) without leaders and 2) without plans, the Kremlin’s strategy also aims to dilute its strength through concessions.  One of the biggest factors that has helped the numbers of protests swell was the incorporation of ultra-nationalist elements who were fed up with corruption alongside new middle class participants who were humiliated by “the swap” and rigged vote, who are still nevertheless far removed from the traditional oppositionist camp.  A series of appointments and re-assignments of officials is aimed at driving a wedge between these constituencies.

The much reviled Vladislav Surkov, architect of sovereign democracy and screenwriter of political theater, was laterally “demoted” (maybe) to the position of Deputy Prime Minister, in an effort to satiate those seeking light reforms.  Ultra-nationalist NATO envoy Dmitry Rogozin was promoted to Sergei Ivanov’s old spot as Deputy PM in charge of defense, hopefully appeasing the xenophobes among the protesters.  Ivanov, a heavy silovik, has been made head of the presidential administration (theoretically shoring up Putin and dissuading any other elites from their eroding confidence in the system), while Vladislav Volodin will take over Surkov’s role as Putin’s right-hand man in a clear consolidation of authority.  Either way, the Kremlin is aiming to motivate at least one of these groups to stay at home and return to docility.

The current strategy being pursued by Vladimir Putin to address the restless public does not inspire confidence that his political style will translate well to a new competitive environment.  To assail the protest movement for lacking a unitary leader is to misunderstand the common grievances uniting so many disparate communities.  Slamming these people, who for once are showing an interest in their role as stakeholders in the country, over an unclear ideology creates even more distance between Putin and the everyday reality for the people.  It is in fact a competitive advantage for the protests to remain a multi-headed hydra, as the emergence of individual leaders quickly become targets of harassment, while the most important measure of success of the protests – a social catharsis or shift in mentality among the Russian public about how governance is organized – is not going to come about as the result of a cult of personality, but rather the product of a community reaching consensus.

The political system is going to have to change in Russia, and even the elites acknowledge this.  Arkady Dvorkovich has said that the country will enter “a period of intense political competition,” while many others have acknowledged that maybe the last Duma elections were not handled all that professionally.  There is no reason to doubt that Putin will be able to put the system into cruise control to take back the presidency, but it is certainly going to be interesting the ways in which they will be forced to open the system, and what will happen with these small windows of opportunity for new players to exert influence on the political process, no matter how small.  But for someone who has enjoyed the comforts of consensual authoritarianism for so many years, it would be a mistake to assume that his experience will translate directly to success and survival a more competitive system, especially in an environment of better informed voters.