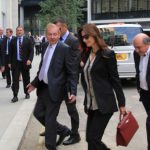 The lawsuit that Boris Berezovsky has brought against his former business partner and protege Roman Abramovic in London’s High Court has solicited a great deal of media attention.  This is unsurprising; the scabrous tale of back-stabbing and wheeler-dealing amid a backdrop of fabulous wealth has proved intriguing to the international media.  As an article by Phillip Stevenson in the FT points out today however, the way in which the trial has uncovered some of the darker aspects of the Wild East 90s asset grab has also turned an unfavorable eye towards the current political climate in Russia.  Berezovsky believes that if corruption was bad then, it is worse now.  From the FT:

Amid the claims, counterclaims and occasional name-calling, there is a thread running through the story: the aforementioned Mr Putin.

Russia is still trapped in the 1990s. True, Mr Putin restored a semblance of order by concentrating power in the Kremlin and the state security services. Some of the big players have changed and the balance of advantage has shifted. But the game is essentially the same. Wealth is concentrated in the hands of a privileged few, corruption remains endemic and the rule of law is a flimsy pretence. Business leaders, as oligarchs are now called, still pay for political protection.

What has happened is that those who prospered during the 1990s were divided into two camps: the good oligarchs, who deferred to Mr Putin’s grip on state power; and the bad ones, who dared harbour their own political ambitions.
Mikhail Khodorkovsky was another who challenged the bargain. After two show trials, the former head of Yukos languishes in a Siberian prison. At the Kremlin, there is a certain coyness about what fortunes may have been amassed by Mr Putin and his close allies. Diplomats say they run into many billions.

Russia is richer now, the beneficiary of soaring energy prices during Mr Putin’s first spell in the presidency. On every other economic measure – foreign investment, technology, the pattern of trade, the condition of the national infrastructure, or educational attainment – the clouds have darkened. Russia’s population is shrinking fast.

There were moments when it looked as if things might change. Dmitry Medvedev, who has kept the Kremlin warm for Mr Putin’s return, seems to have grasped the challenges of an economy defined by hydrocarbon riches, obsolete technology and capital flight. The good intentions have come to nought. Mr Putin is many things but he is not a moderniser.

As in economics, so in geopolitics. Mr Putin’s outlook on the world is locked in the post-Soviet timewarp. A cool analysis of Russia’s strategic interests would throw up several worries. The depopulation of Russia’s eastern territories and the rise of jihadi terrorism to the south would be among them. So too would be the country’s economic backwardness and, incidentally, the scorn this attracts in places such as Beijing.

Mr Putin prefers old enemies. Russian foreign policy is defined by his embrace of victim-hood – by the loss of empire and the belief that Moscow was cheated by Nato after the collapse of communism. Russia, in this mindset, must be treated as if it is still the second superpower. No matter that its economy is a 10th of the size of that of the US.

There is nothing in this wilful embrace of decline for the west to celebrate. American and European interests lie in a modern, stable and prosperous Russia closely engaged in the world. A declining Russia will prefer to seek out enemies rather than make friends. Sad to say, all the signs are that Mr Putin is beyond convincing. Like the oligarchs, he is frozen in time.