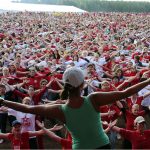 Nashi, the youth wing of United Russia, has time and time again proved itself an energetic task force for the Putin regime, executing tasks ranging from simple yogic adoration of the party’s leaders at the Seliger summer camp, to actual acts of hooliganism, such as pelting the British ambassador with eggs or picketing the Estonian embassy.  Recent evidence that Nashi offers cash incentives to bloggers to praise Mr Putin is a choice example of how this organism employs its considerable financial resources (not all of it, apparently, is used on canoes and effigies of Condoleezza Rice.)  It seems now, however, that the group may have had its day.  The Independent’s Shaun Walker reported yesterday that the band of hackers Anonymous has found emails which point to the group’s disbanding after the elections.  Since Vladislav Surkov received his marching orders, it is perhaps unsurprising that the organization he created would be in jeopardy.  However as Walker point out the group’s dissolution would by no means spell the end of the Putin youth – but simply its re-branding:

If Nashi is closed down, it cannot be assumed that the Kremlin will stop nurturing young activists. It may simply rebrand its youth wing. Anonymous said in its statement that it suspected the same leaders would be involved, but that the movement would be renamed.

Doubtless Putin will be advised to avoid the most accurate choice of soubriquet: “MINE”.