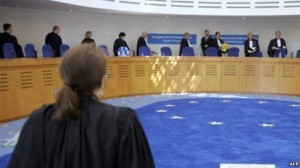 The European Court of Human Rights in Strasbourg is a bright spot on the horizon for many Russians who feel that seeking justice in their homeland, notorious for its ‘legal nihilism’, is a fool’s errand.  We’ve heard a lot recently about how the Kremlin’s idea of ‘legal norms’ seems to run counter to those espoused by a functioning impartial judiciary.  Cases from the Federation represent the most substantial portion of the international court’s entire caseload.

Some people will have been worried to note therefore that the ECHR has now decided, in an attempt to unblock its clogged caseload, that it will refuse to hear cases that have been improperly drafted.  RFE/RL reassures them that there is no need to panic:

Anna Stavitskaya, a defense lawyer who has represented numerous clients in Strasbourg, says the change is meant to streamline a system clogged by tens of thousands of improperly prepared applications.

“The European Court is a court that examines violations of the European Convention. So you need to demonstrate that a violation has in fact occurred and follow the court requirements,” Stavitskaya says.

“If the complaint is really serious and touches on some kind of serious violation of a right guaranteed by the convention, then I don’t think that it would be denied on formal grounds.”

Experts have stressed that the new requirements do not affect what they consider the most important aspects of the court’s applications: the process remains free of charge, and can still be submitted in handwritten form by individuals in prison.

Human rights lawyer Karinna Moskalenko, who won the first-ever case against Russia heard in public hearings at the Strasbourg court, says the recent rule-tightening will ultimately work to the advantage of those who need help the most.

“The basic requirements that apply to every applicant are laid out in a very detailed, clear way in the complaint forms,” Moskalenko says.