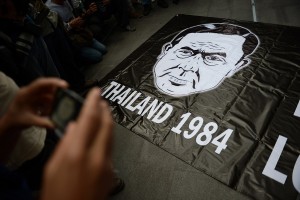 The following op/ed article by Robert Amsterdam and Jakrapob Penkair was first published in the Diplomatic Courier:

Less than a month since Thailand’s military seized power by a coup d’etat, the junta has been quick in attempting to “normalise” their illegal power grab.

Seeking to shore up support, the junta has launched a charm offensive by sending a delegation to China, where they now claim to have support for their coup, and hosting visits of military leaders from neighboring states. This regional strategy could place extraordinary pressure on Washington to recognize the coup or risk watching a key ally drift into Chinese hands.

For anyone who remembers the 2006 coup, there may be a sense of déjà vu. At first, foreign governments made strong statements, followed by inaction, and later followed by resignation and acquiescence.

U.S. Secretary of State John Kerry was firm in his initial comments, stating: “There is no justification for this military coup. (…) We are reviewing our military and other assistance and engagements, consistent with U.S. law.”

The law on this matter is clear—no U.S. aid can go to a government whose elected representative was deposed by a military coup. A large-scale joint exercise with the Thai military has already been cancelled, but still no sanctions have been tabled.

The European Union’s initial reaction was similar, but so far they have refused to suspend arms sales or discuss sanctions. EU High Representative Catherine Ashton urged the military to release the thousands of detained political prisoners and ease censorship, and said that they are following developments with “extreme caution.”

Last time there was a coup in Thailand, Western nations failed to support the democratic will of the Thai people. The generals have clearly interpreted the message that a coup only poses short-term inconveniences instead of real consequences.

Before the May 2014 coup, Thailand had experienced 18 interruptions of it democracy by the military. It begs the question: if leading Western governments and trade partners with Thailand were less permissive and forgiving in response to military coups, would they continue to occur with such frequency? Have we lowered our expectations for Thailand?

There is no ambiguity about the repression taking place in Thailand today. The junta’s soldiers have arrested and held thousands of detainees at gunpoint and beyond the reach of their families (or lawyers) or weeks. Thai citizens can face arrest for almost anything, for example giving the “three-finger” anti-coup salute from the Hunger Games film, while the military is threatening to jail people based on “liking” social media content. The ugly spectre of lese majeste is flourishing, while even people outside of Thailand have been threatened by the coup leadership.

For generals such as Prayuth Chan-ocha, an architect of the massacre that murdered more than 90 unarmed protesters four years ago, the coup represents both an economic opportunity (military budgets have already been increased with zero transparency) as well as an engine of impunity—an obligatory exercise taking place once every decade or so to cover up responsibility for human rights crimes. There are unfortunately a class of citizens in Thailand who do not believe that their fellow countrymen enjoy equal rights to representation. This kind of tyranny poses a chilling image of what could happen next.

The coup began long before the Army’s declaration of martial law. It was forged under the so-called People’s Democratic Reform Committee (PDRC) of former Deputy Prime Minister Suthep Thaugsuban, who had been charged with murder. Any other government would have arrested and convicted this man, Yingluck Shinawatra’s administration was stripped of its most basic powers typically endowed to an elected government.

If the international community wants to see Thailand successfully emerge from the coup, strong action is required, beginning with and not limited to actions such as a steadfast refusal to recognise the junta as a legitimate government of Thailand, halting of all arms sales and military cooperation, targeted sanctions against assets and travel privileges of coup leaders, sanctions and public boycotts of the main business conglomerates who financially sponsored Suthep’s overthrow of the elected government and demanding the immediate restoration of democratic governance.

A failure to respond to this coup in a much stronger way than the past will only perpetuate this destructive cycle. It is time to expect more from Thailand and stand behind democratic values. It may be our last opportunity to do so.

Robert Amsterdam of Amsterdam & Partners LLP serves as international defence counsel to the United National Front for Democracy Against Dictatorship (UDD), and prominent Red Shirt group in Thailand. Jakrapob Penkair is a founder of the United Front for Democracy Against Dictatorship (UDD) and former Minister and Member of Thailand’s Parliament. He resigned from the government after criticisms of his 2007 comments against the nation’s patronage culture and left the country after a military crackdown on protesters against the 2008 judicial ouster of the government he had served. The views expressed are their own.