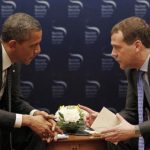 One may have the feeling that the content of Medvedev’s presidency was writ in water.  One of the slightly more concrete elements of his tenure, however, remains his overseeing of the ‘reset’ with the US.  For President Barack Obama, the i-pad-toting lawyer was a more obvious sympathizer than predecessor Putin, behind whom the shadow of the Cold War has always loomed.  Today on the sidelines of the nuclear terrorism summit in Seoul, Obama and Medvedev met for the last time before the latter relinquishes the Presidency.  Since Obama too faces an election, and, if he loses, a Republican successor is unlikely to prove pliant in relations with Russia, is this the swan song of the reset?  Russia Profile points out that the entente cordiale was never set in stone:

But as analysts have warned in the past, the “reset” was never meant as a fix-all solution. According to Samuel Charap, a Russia expert at the Center for American Progress, the Obama administration’s policy was targeted neither at affecting fundamental change in Russian diplomacy nor in its political culture – but instead, at pushing through a pragmatic agenda and developing some semblance of dialogue. “What [the ‘reset’] was, and remains, is an effort to work with Russia on key national security priorities where U.S. and Russian interests overlap, while not hesitating to push back on disagreements with the Kremlin at the same time,” he wrote last August in Foreign Policy. “The idea is that engagement, by opening up channels of communication and diminishing antagonism, should – over time – allow Washington to at least influence problematic Russian behavior and open up more space in Russia’s tightly orchestrated domestic politics.”

What has proved even more interesting however, is the fact that that the pair were seemingly briefly caught talking off the record about some key issues.  The Telegraph reports the exchange as the following:

Mr Obama says: “On all these issues, but particularly missile defense, this, this can be solved but it’s important for him to give me space.”

Mr Medvedev replies: “Yeah, I understand. I understand your message about space. Space for you …”

Mr Obama retorts: “This is my last election. After my election I have more flexibility.”

And Mr Medvedev finishes: “I understand. I will transmit this information to Vladimir [Putin].”

As RFE/RL’s Transmission points out, ‘For Medvedev’s sharpest critics, the incident simply drives home the image of the outgoing president as Putin’s errand boy’.  Albeit the face of the reset, Medvedev was never the force behind it.