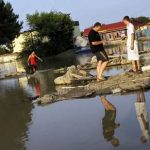 It is indisputable that heavy rainfall can produce major flooding. It can also be extremely difficult to preempt a natural disaster or its consequences, as authorities from across the globe will testify.  However in the instance of the flash floods which claimed the lives of 171 people in the Krasnodar region on Friday and Saturday, there is some dispute as to what actually occurred to induce such levels of destruction.  The fact that victims of the disaster have made some serious accusations against the authorities (to the point of suggesting they might have caused them by opening sluice gates) reveals the fact that in Russia, distrust of the authorities runs deep.  From AFP:

After torrential rains dropped up to 300 milliliters (12 inches) of water late Friday and early Saturday, the flooding inundated Krymsk so quickly that that residents said they suspected that water had been intentionally released from a reservoir in the mountains above the city to prevent the dam from being breached.

The suspicion was that this had been done to protect the Novorossiysk port, which is part-owned by the government and Transneft, the state monopoly that runs the oil pipeline system. The reservoir lies in mountains situated between Novorossiysk and Krymsk. It was unclear whether the port was in any danger.

The government denied the sluices had been opened and, in an effort to convince the skeptics, the Krasnodar region governor arranged for a group of residents to fly over the reservoir in a helicopter. He even arranged a second flight over a wider area after they complained that they had not seen enough the first time. Two members of the group were shown on television saying they were now convinced that the reservoir had not been the source of the flooding.

This was the same conclusion reached by a well-known local environmentalist, Suren Gazaryan, who has opposed the governor on other issues. Gazaryan studied the area around the reservoir and the high-water marks along a network of mountain streams, posting the photographs and his conclusions on his blog.

Still, prominent Moscow journalist Oleg Kashin, who was in Krymsk, said on Kommersant FM radio that none of the residents he had spoken to believed it was the weather alone that caused the flooding.

“It’s not that the government’s version of the events differs from that of the victims, but the thing is that it’s normal in Russia to distrust authorities in everything — be it a natural disaster, elections or soccer,” Kashin said. “I’m sure that Krymsk will get repaired, compensations will be paid and the dead will be buried. But you have to agree that this will not make this crisis of confidence go away.”