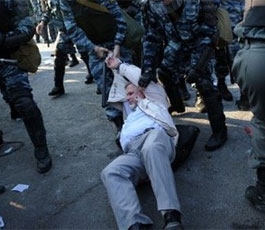 Human Rights Watch has issued a stern warning to Russia over the tactics used by police against opposition protestors on Sunday at the ‘March of a Million’ protest against Putin’s return.  Whilst acknowledging that in some cases protestors were aggressive towards police officers, the NGO’s account also suggests that a number of police tactics (such the creation of a bottleneck designed to stymy the progress of protestors, the indiscriminate use of tear gas and other weapons) were unacceptable.  Below is just part of their report, which includes the testimony of participants:

Several activists interviewed by Human Rights Watch, including two who were themselves detained, said that riot police in full gear dragged protesters by their arms and feet, twisted their arms, and stomped on people who had fallen to the ground. Witnesses also reported that some people were bleeding from being hit or dragged by police along the asphalt and that at least three demonstrators had to be hospitalized after being released from police precincts later in the evening.

One witness, Sergei Davidis, a human rights lawyer, and an organizer of the event, said:

People were being arrested indiscriminately all over the place. The use of force was not targeted just against those manifesting aggression. One [peaceful] woman, for example, was shocked with an electroshock weapon. I saw many people beaten by police. They used batons a lot, including against those people who were standing there peacefully and just could not get out of the crowd.

Riot police officers hit Alexei Pomerantsev, a journalist from the prominent independent newspaper Novaya Gazeta, with batons and dragged him to join other detainees held in a reinforced vehicle. Novaya Gazeta reported that Pomerantsev was released quickly, once he was able to show his media identification to a police officer in charge of the vehicle.

Dmitry Oreshkin – a prominent policy social scientist and member of Russia’s Presidential Civil Society and Human Rights Council, a group of prominent civil society activists and experts recruited by the president to advise him on human rights issues – told Human Rights Watch what he saw. He said that when the bottleneck created by police was causing demonstrators around him to be pushed together and the crowd was growing increasingly agitated, he decided to intervene with the police, using his official credentials.

Oreshkin said that police roughed him up as he tried to speak to them. “I started asking them to let people proceed to the square, to give them more space, to give them more space by moving the police chain some 10 meters back, but they ignored me,” Oreshkin said. “I tried to get through the chain waving my ID to speak to some officials in command, but they would not let me. Several officers stomped on my feet. I received a punch in my stomach. They did something to my hand – it started bleeding… Finally, some [more senior official] came up and ordered to let me though.”

The Other Russia also has its account of aggressive police tactics here.