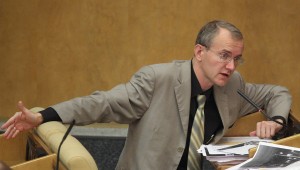 Opposition politician Oleg Shein, whose activities in the town of Astrakhan we blogged about here, is on his 25th day of a hunger strike in protest against the ‘mafia system of government’ in the southern city.   Today Ria-Novosti reported that Shein, who has made it his mission to highlight electoral fraud in the parliamentary election, has denied rumors that his health has been severely endangered by the protest.  Nonetheless, observers of his fasting have argued that physical damage is an ineluctable result of this extreme course of action.  Masha Gessen in the New York Times explains why Shein and 21 other supporters have resorted to this harrowing tactic:

It was a radical move but also a rational one. For three months, hundreds of thousands of Russians all over the country, including Astrakhan, had been protesting December’s rigged parliamentary elections. The Kremlin responded by placing Web cameras in all the polling stations for the March presidential vote. Activists protested that the cameras would be easy to fool and circumvent — but in Shein’s case a number of the violations seem actually to have been caught on camera (here is a site, in Russian, where a blogger has posted and analyzed footage from the precincts).
After the protests failed to prevent widespread violations during the presidential and municipal elections March 4, many of the protesters went home, dispirited. The authorities were clearly unwilling to put an end to the rigging, and the public was powerless to make them.

Which is exactly why Shein, who has been active in leftist politics in Russia for more than 20 years (and has served three terms in the national Parliament), arrived at the idea of resorting to a hunger strike. If the authorities would not listen to legal arguments, to reason, or to crowds gathered in public squares, maybe they would at least pay attention to people willing to die for fair elections.