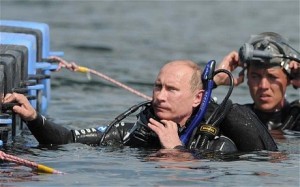 He lied to us!  Who’d have thought the Prime Minister was not really capable of identifying a pair of sixth century vases whilst deep sea diving.  The truth is out.  From the New York Times,

Vladimir V. Putin’s press secretary, Dmitri S. Peskov, says now-famous television video of the Russian prime minister diving to the bottom of a bay and discovering ceramic jugs from the sixth century was, in fact, a setup.

In an interview released late on Tuesday, Mr. Peskov said that the jugs had actually been found by archeologists during an expedition “several weeks or days before.” They were then placed in six feet of water, where Mr. Putin, dressed in a wetsuit and trailed by cameramen, could find them.

“Naturally, they either left them there, or they put them there,” Mr. Peskov said. “This is completely normal. It is totally not a pretext for malicious joy and so forth.”

The episode provoked considerable amusement among the  Internet users who are most skeptical of Mr. Putin’s herculean image. In an interview with Dozhd TV, a Web-based news and analysis channel, Mr. Peskov chuckled and noted that he was on vacation when the episode was filmed, so he “could not have thought it up.”

Mr. Peskov went on to say, however, that Mr. Putin’s public relations operation is less extensive than outsiders tend to think. “In general, regarding his ‘legend’ and so forth, Putin doesn’t need press secretaries or image-makers or public relations firms or anyone else,” he said. “In fact, most of the time, he does it himself.”