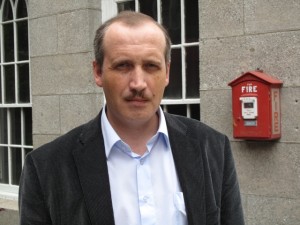 On Wednesday the news broke that Novaya Gazeta’s deputy editor Sergei Sokolov (seen left) had apparently been threatened by Russia’s chief investigator Aleksandr Bastrykin, in an ominous sounding confrontation in a Moscow forest. The claims were, regretfully, not particularly surprising.  Journalism in Russia is a high-risk profession for reporters who are unwilling to toe the Kremlin line and the Investigative Committee has been sharpening its claws this week with the crackdown on the opposition.  Bastrykin’s response – immediate denial – was hardly surprising either.

What is unusual however is the fact that the investigator, who is a close ally of Putin, agreed today to meet with Novaya Gazeta journalists and offered an apology to Sokolov for the ‘emotional outburst’ which he subjected him to.  Whilst he did not acknowledge whether he had in fact threatened the reporter (who has apparently had to flee the country as a result of the intimidation) analysts have noted that the apology in itself seemed an anomalous act of diffidence for the steely investigator.  Speculation remains as to the silovik’s motives.  But does it all point to a deeper intrigue, to a bout of infighting in the wings of the Kremlin?  Brian Whitmore has helpfully tried to untangle some of the threads in this ever-thickening plot:

Media reports have suggested that this week’s scandal could be part of an ongoing struggle for power, access, and influence between Bastrykin’s Investigative Committee and the Prosecutor-General’s Office.

Some Kremlin-watchers see it as a harbinger of a new “Siloviki War” similar to the one that broke out in 2007 between different factions of the security-service veterans surrounding Vladimir Putin. That dust up, which actually got bloody, occurred as Putin’s second term as president was drawing to a close and various clans in the elite, nervous about the succession, were furiously jockeying for advantage.

Those analysts who see a larger game going on point to the fact that on June 11, two days before Muratov’s letter, Aleksandr Khinshtein, a State Duma deputy from United Russia, wrote on his Twitter feed that “an unprecedented scandal awaits Bastrykin.”  (You can view Khinshtein’s Twitter feed here. Scroll down to June 11 to see the tweet.)

Khinshtein, who is very plugged in to the ruling elite, tweeted this comment as the Investigative Committee agents were searching the apartments of opposition figures — including Aleksei Navalny and Ksenia Sobchak — and a week after Bastrykin and Sokolov argued in Nalchik.

Of course, the Siloviki War scenario is not incompatible with the siloviki-run-wild theory. Both could actually be correct. The Investigative Committee has clearly taken the lead in the Kremlin’s crackdown against the opposition, and their methods appear to have other parts of the elite recoiling.