Is Putin’s The New Face Of United Russia? 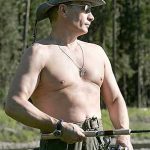 As Kremlinologists imagine, for the most part mournfully, how another decade with Putin might look, is the PM imagining how he might look?  Amidst all the high politics, here’s a little bit of scurrilous gossip: has Vladimir Putin gone the Gadaffi/Berlusconi route and treated himself to a facial nip and tuck?  From RFE/RL:

Tongues began wagging afresh after the United Russia party conference on September 24, when the 58-year-old premier announced his intention to retake the presidency and looked remarkably uncreased while doing so.

London’s “Daily Mail” suggested the premier — who, after all, has now committed himself to trying to look presidential till the ripe old age of 71 — may have undergone a facelift, cheek-fillings, a couple of brow-lifts, bag-removal, and perhaps a little “botoks.” One assumes a little poison in the face is nothing to a trained KGB man. And after all, there’s a precedent: Both Silvio Berlusconi and Muammar Qaddafi have admitted to having work done.

Putin spin doctor Dmitry Peskov helpfully dismissed the speculation, telling the “Mail” that as far as he knows, the prime minister hasn’t been going through any “surgical interventions.” But at least one London plastic surgeon said he was certain that Putin had gone under the knife because of the “dead look” in his eyes, which made us wonder if he had seen any pictures of Putin before. Another boldly suggested that any apparent eyebrow lifts had had an unfortunate “feminizing” effect.

Speculation about Putin’s facial upkeep first arose in October 2010 during a trip to Kyiv, when the premier was photographed with evident bruising around his eyes. The ever-helpful Peskov chalked it up to bad lighting, but American plastic surgeon Anthony Youn, the author of the Celebrity Cosmetic Surgery blog, suggested Putin had either walked into a door or undergone an eyelid lift. A subsequent photo session at the Lake Seliger youth camp this summer by the blogger Ilya Varlamov fed speculation further, with bloggers commenting on the premier’s vanishing crow’s feet, narrowing eyes, and newly plumped-out cheeks.

Yesterday, it was reported by the Guardian that Novaya Gazeta had asked an artist to draw a picture of what Vladimir Putin’s cabinet would look like in 2024, the results of which can be seen here.  If he does plan to remain in power until he’s 71, that action man physique will certainly need a little buffing.