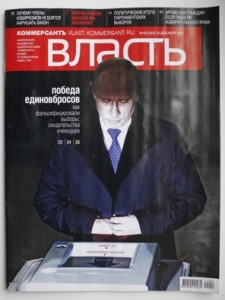 If anyone had any illusions about the state of media freedom in Russia, they will have been put to bed by yesterday’s ugly and unabashed intervention in the work of Kommersant publishing house.  Kommersant Vlast editor-in-chief Maxim Kovalsky and holding general manager Andrei Galiyev were fired over a rather acerbic insult directed towards Vladimir Putin published in the weekly magazine.  The lampooning of Russia’s national leader was, it seems, not taken well by the magazine’s billionaire owner Alisher Usmanov.  Today we saw that Mikhail Prokhorov is now interested in purchasing Kommersant.  Will Englund in the Washington Post sees intrigue afoot:

Why has Prime Minister Vladimir Putin been so quiet? What does it mean when a former Putin cabinet minister, Alexei Kudrin, talks about creating a liberal opposition?

And what’s the story behind the firing this week of the top management at one of Russia’s more respected magazines?

That last incident looked to a lot of Russian journalists like a signal. It’s not what we say in public, it’s what we do behind the scenes, the authorities seemed to be warning them. But this also could have been the initiative of a loyal member of the inner circle — in this case, the owner of the magazine — trying to anticipate his patron’s wrath and moving first. There’s a long Russian — and Soviet — tradition of that. Or, possibly, it was just because someone in power doesn’t like bad taste.

Swear words don’t appear in respectable publications here, in large type. But Russian journalists immediately began to suspect a darker motive behind the firing. They feared that those in power, whose pronouncements have been so modest in public, were finding an indirect way to deliver a telling response. That has been a classic tactic throughout Russian history.

Alexei Venediktov, editor in chief of Echo Moskvy radio, tweeted that it’s unlikely that the top managers at Kommersant Vlast would have lost their jobs had the insult been directed at anyone besides Putin. Others quickly agreed.

Then, late Tuesday, another of Russia’s richest men — Mikhail Prokhorov, owner of the New Jersey Nets — said he was going to make a bid to buy Kommersant from Usmanov.

Prokhorov announced Monday that he intends to challenge Putin in the March 4 presidential election. If Usmanov was sending a message with the firings, Prokhorov seems to be sending one back.

Prokhorov has cast himself as a business-friendly candidate who can appeal to the rising urban middle class. Kommersant’s orientation toward business news would be a good fit for him. This move might also be aimed at dispelling fears that he’s secretly in cahoots with Putin to drain off middle-class opposition.