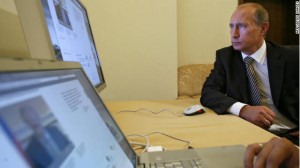 President Vladimir Putin has made it known at several points, not without a hint of pride, that he does not use the Internet.  Doubtless his disdain for all matters web-oriented stems in part from it being the favored tool of the seditious opposition bandar-logs (or ‘hamsters‘) who are determined to unpick his presidency.

However realpolitik does demand that the Kremlin engage with all tools of political communication and it has, in the past, tried to commandeer social media for its own agenda.  Howard Amos reports on the latest attempt to gain a foothold in cyberspace:

Government minister Mikhail Abyzov told the Izvestia newspaper that the network, which is intended to go live in June and to attract private capital, would be created from an existing site called russiawithoutidiots.rf. Set up earlier this year with the support of the then-president, Dmitry Medvedev, the site allows users to complain about civil servants.

The initiative is also part of an agenda pushed by Medvedev, who is now prime minister, to build the role of e-government in Russia. Last month Medvedev forced all his ministers to use iPads, and dispensed with paper during cabinet meetings.

But analysts are sceptical that a Kremlin social network could ever rival international brands such as Facebook and Twitter and their popular Russian equivalents, Vkontakte and Odnoklassniki.

“If the government creates some form of social network, then people will not join it,” said Andrei Soldatov, an expert on Russia’s security services and the internet. “It is not realistic.”