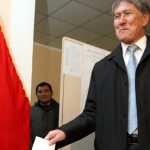 The weekend’s presidential election in Kyrgyzstan resulted in the victory of the Kremlin-friendly Prime Minister, Almazbek Atambayev.  Within one day of his election, the President elect has already stated that the Manas air base used by the US, to the irritation of Russia, will have to close.  Putin’s Eurasian Union idea conveys the importance of enveloping the former soviet states, among them this central Asian nation, which is an important geo-political crossroads.  But just how Russia-leaning is the new President?  Russia Profile considers:

But though experts agree that Atambayev is undoubtedly pro-Russian, they said there’s more to what meets the eye. Erica Marat, a security expert at the Washington D.C.-based Central Asia-Caucasus Institute, said the newly minted president realizes the consequences that may come from getting too close with Moscow. “He’s ideologically pro-Russian – not only in terms of economic and political interests,” she said. “But even though he will be very pro-Russian, he will still try to maintain some contacts with the West, because he understands that unless he has a balanced foreign policy, the Russians will always have the upper hand.”

Part of the closeness, Marat said, is a result of Atamabyev’s political acumen within the realm of post-Soviet politics. But she added that while Atambayev knows his way around politics involving Russia, he has had little exposure to Western politics and remains inexperienced in dealing with potential American or European allies. “Atambayev has very good relations with Putin. He knows how to talk with Putin, and he knows what sort of language to use,” said Marat. “He doesn’t have this sense with Western partners.”

Whether such inexperience will leave him vulnerable to Russian pressure remains to be seen. One thing, however, is for certain: the lure of Putin’s ambitious integration plans will continue to be a powerful force, especially as the United States pitches its own “New Silk Road” project – to be implemented as it withdraws from Afghanistan – as a means to offset Russian influence by establishing key Central Asian trade routes. Analysts have long painted Putin’s efforts as a masked ploy to pull former Soviet states back into Moscow’s orbit.

But Kyrgyzstan seems to have few other options. Former interim President Roza Otubayeva, herself often depicted as moderately pro-Western, even conceded that Kyrgyzstan’s future lies within Russian-dominated organizations, largely because of the country’s economic and security concerns and its long history with Russia. According to Marat, even if Atambayev does attempt to balance relations between East and West, his hands may be tied by Russia’s political influence and Kyrgyzstan’s limited economic activity. “It looks pretty obvious to most people that the Customs Union is more of a political union. It’s not so much economic – economy comes after political alignment. By joining the Customs Union, these countries are showing that they support Russia politically,” she said. “For Kyrgyzstan it is sort of a trap. Kyrgyzstan doesn’t really have many choices.”