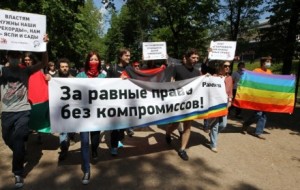 Protecting LGB rights in Russia has long been an uphill struggle. A climate of intolerance, hostile rhetoric from mainstream politicians and the repeated quashing of pride parades has now found its judicial corollary in a particularly pernicious piece of legislation.  Rights activists and a host of commentators have, with good reason, voiced their opposition to a new law which could effectively criminalize any discussion of the notion of being gay.  The New Statesmen notes with disappointment that whilst the US has made its criticism clear, there has been insufficient international outcry:

By the week’s end, the St. Petersburg Assembly hope to make it illegal for any person to write a book, publish an article or speak in public about being gay, lesbian or transgender. Campaigners are currently attempting to prevent such a move. It’s too late for Arkhangelsk and Ryazan, those regions already having criminalised what is termed “gay propaganda”.

It would be easy to be unaware any of this was happening — considering the complete lack of coverage it has gained from mainstream British media. The Bill is now said to be stalling — though as a result of “technical difficulties” in applying the law, rather than foreign pressure. When referring to a law that seeks to bind the mouths of minorities, there’s a bleak irony in our own press falling silent — particularly since they are doing so willingly. This is not Russia, where the murders of outspoken journalists go unsolved and independent media outlets are shut down. The British press has the freedom to report this news but simply chooses not to. As his ruling party sought to continue on its path to wipe out “unapproved” voices, the story that filled the news was Putin being jeered at a sporting event. Nothing else appeared to matter, the Russian-reporting quota filled by the image of the PM posturing his way into a martial arts ring.

Slowly but surely — and without much notice — regions of Russia are hoping to pull off their most brazen attempt yet, taking a national crisis in freedom of speech and aiming to fully silence a specific group. What they are seeking to criminalise is not even active dissent, but simply a divergence from the “norm” that the authorities are desperate to protect.

It’s apparent with the quickest glance at what is being proposed. The exact wording of the law prohibits the so-called propaganda of “sodomy, lesbianism, bisexualism and transgenderism, and pedophilia to minors.” In comparing consensual adult acts to child abuse, it is in fact the Regional Assemblies that are attempting propaganda, exacerbating the general public’s fear of “homosexual perversion”.