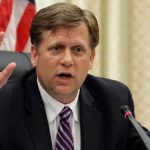 Washington’s new ambassador to Russia, reset-architect Michal McFaul, was sworn in on Tuesday.  US-Russia relations have certainly taken a bit of a beating of late.  In December, Hillary Clinton faced verbal excoriation from Vladimir Putin for her stance on the protest movement.  In addition to this, missile defense remains unresolved, the situation in Syria is a nexus of East/West disagreement, and despite some flexibility in its verbal stance on Iran, Moscow remains resolute in opposing sanctions.  So how will McFaul, who was a special assistant to the President on Russian and Eurasian affairs, fare on his Russian ‘adventure’ as Clinton puts it?  Many have taken the nomination of the Stamford Professor as a sign that Obama is committed to re-galvanising the reset. Dan Peleschuk from Russia Profile considers the sixth ambassador’s credentials, and whether these will be enough to make a difference to bilateral relations in the tense pre-election period:

[…] McFaul has amassed a wealth of contacts and built solid relationships with his Russian counterparts. Having spent sporadic periods living, studying and working in both the Soviet Union and Russia, he has firsthand experience in building workable contacts with top political players in Russia throughout the past 20 years. McFaul is so familiar and respected in Russian circles that when Obama informed President Dmitry Medvedev of his selection last year, Clinton said, the Russian president reportedly answered, “Of course. He’s a tough negotiator.”

For this reason, many have hailed McFaul as the ideal candidate. And according to Matthew Rojansky, the deputy director of the Russia and Eurasia program at the Carnegie Endowment for International Peace, McFaul has proven himself a worthy ally on both sides of the fence. “You could see how seriously he takes the responsibility and how well-respected he is not only by his own team from the administration, but by the secretary of state, State Department colleagues, and colleagues throughout government,” said Rojansky, who attended McFaul’s swearing in ceremony. “You could also see that he has earned respect from the Russian side, including [Russian] Ambassador [Sergey] Kislyak, who was there, and from many of Russia’s neighbors.”

Yet campaign season has befallen both the United States and Russia, and has inevitably shifted the electorates’ focus from foreign to domestic issues. To this end, other experts remain more cautious about McFaul’s potential influence. While he is among the most experienced and well-suited men for the job, according to Fyodor Lukyanov, editor in chief of Russia in Global Affairs, McFaul’s arrival comes at a touchy time and his work will be limited largely to damage control. “If somebody uses foreign policy issues in an election campaign, it’s usually to blame the opposite side – and this is quite common for both countries,” he said. “I’m afraid that for ambassadors, this will be quite a difficult period.”