Medvedev On The Warpath 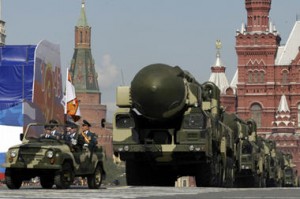 Yesterday President Medvedev put rather a damper on Washington’s Thanksgiving celebrations with the announcement that Russia would not tolerate the White House’s long-planned missile defense shield in Europe.  The Kremlin has always made its objections to the system known, but yesterday the President adopted a surprisingly stringent tone, pledging to deploy deterrents and threatening that Russia would consider backing out of START if the plans were to go ahead.

This sudden burst of unabashed hawkishness is somewhat uncharacteristic of the mild-mannered President.  Medvedev has widely been seen as the friendly face of the Russian reset, enjoying personal ties with fellow lawyer Barack Obama, whilst Putin has always remained rather more chilly and Soviet in his approach to the US.  What we can note however is that since the announcement that Putin would return to the presidency was made, the current President has faded into the background of an election campaign that seems to be designed to showcase the popularity of the national leader, to the embarrassment of his obselete tandem partner.  Perhaps, as CNN’s Security Clearance blog suggests below, Medvedev’s stab at NATO is nothing more than a last-ditch attempt to give the Russian electorate something to remember him by, beyond unfulfilled reform promises and a dodgy badminton video:

“I think you have to look at the context,” he says. “It seems to me this is not aimed at NATO, this is aimed at the Russian domestic audience with a view to the parliamentary elections there in seven days time. Just as in America beating up on Russia is always good in politics, in Russia taking a hard line against the U.S. and NATO always plays very well with the electorate.”
Moscow, Pifer thinks, would never consider actually pulling out of the New START agreement. It’s important to them, he says, because they are retiring a lot of old missiles and START “is their vehicle to ensure that U.S. forces come down at the same time.”
Ironically, if Russia could get beyond the demand for a legal guarantee on the missile defense system, “there is a fairly open path to NATO-Russia missile defense cooperation” which could give Russia a voice in how to shape the architecture of missile defense, Pifer says.

Medvedev is in the last months of his presidency. In March of next year Russians will go to the polls to elect a new president, and the leading candidate is Vladimir Putin, known for taking a harder line than Medvedev.

Could this mean even more trouble for the “reset?”
Pifer says, “I think you’ll get the same strategic line from the Russians, though Putin is perhaps a bit more suspicious…more skeptical about U.S. intentions then Medvedev is, so there will be perhaps that change in tone.”

The reset may not be over but it could be headed for some stormy weather,