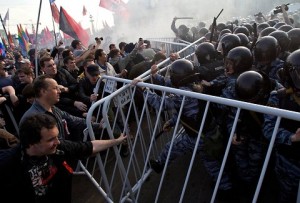 Tomorrow, June 12, is Russia Day, a public holiday commemorating the day when the nation seceded from the USSR.  Protestors in Moscow have secured a permit to hold a rally of up to 50,000 people.  Lest this be taken as a sign, however, that the opposition will be allowed to freely express their views, news just in suggests that the Kremlin has, in fact, already drawn its sword.   From the Guardian:

Armed police have launched a series of early morning raids on the homes of prominent opposition activists as Moscow braces itself for the next mass street demonstration against President Vladimir Putin.

“There is a search going on in my home,” Navalny wrote on Twitter shortly after 8am local time. “They almost split the door in two.”

Those who have had their properties searched have also been summoned for questioning by police on Tuesday morning – a time that could prevent their attendance at the march, which is due to begin in central Moscow at midday.

Russia’s Investigative Committee said in a statement that more than 10 such searches will take place on Monday and that they will all be conducted in “strict accordance with the norms of judicial procedure”.

Since tomorrow’s rally will be the first major protest since the introduction of the new law raising fines for protest violations by enormous sums, we can safely say that the ‘norms of judicial procedures’ are, to Putin’s mind, a matter of interpretation.