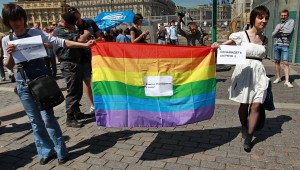 The St Petersburg anti-homosexual propaganda law has raised a global storm of controversy, unsurprisingly, given that it effectively legalizes homophobia in a country where sexual minorities are already uniformly harassed by the state and frequently denied the opportunity to express their rights.  It was interesting to read this morning in the Moscow Times that there are people who want to see the bill introduced in the capital city and extended to incorporate sexual propaganda of any kind, as if to attenuate its discriminatory elements:

“Representatives of parental organizations said the law was not aimed at people of non-traditional sexual orientation, but a necessary step to protect children from information that would produce psychological harm, a news release about the discussion on the City Duma website said.”

One has to wonder if this can really be the case, given that the notion of homosexual propaganda extends to all manner of ‘manifestations’.  Will heterosexual couples be banned from kissing in the street?  Or holding hands?  Unless Russia is entering a new phase of sexual puritanism (which given the weekend’s demonstration of mass piety might not seem that unlikely), it seems that this is nothing but empty rhetoric.