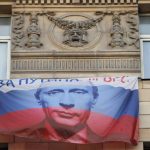 200,000 web cameras have been installed at polling stations across Russia (at a total cost of $478 million) in preparation for this Sunday’s vote, as critics point out that the footage won’t cover the places where violations tend to take place.  A student in St Petersburg was arrested for selling absentee ballots earlier this week.  The Investigative Committee is trying to track down the source of faked videos of election fraud.  The Central Elections Commission says it has uncovered no violations regarding candidates’ access to media coverage in the run-up; independent watchdog Golos says that Putin has had disproportionate coverage.  ‘In Rzhev, a city of about 70,000 inhabitants 230 kilometers west of Moscow, no campaign posters can be seen except for those endorsing Putin.’  Moscow authorities have approved a Monday post-election opposition rally on Pushkin Square, capping the gathering at 10,000.  Mayor Sergei Sobyanin says that the city will not allow any long-term street protests.  Voting factbox from Reuters.

The next Duma vote is due to take place in 2016 and Vladimir Putin says it will not be held early.  The experience of Sergei Vasilenko in trying (and failing) to investigate corruption for the Federal Security Service demonstrates how systemic the practice really is, says this piece.  Putin’s latest comment on the situation in Syria is that the West’s refusal to demand that both sides pull out of besieged cities has perpetuated the bloodshed.  A court in Lermontov has canceled town council elections following a hunger strike by the opposition. Human Rights Watch says authorities are tolerating mass-scale anti-government protests whilst cracking down on Kremlin critics behind the scenes, saying that many activists have been attacked or harrassed in recent months.  An activist in Irkutsk says he sustained a concussion following a beating outside his apartment.  Garry Kasparov has responded to a comment by Vladimir Putin that he calls ‘an alibi for a murder not yet committed’.

PHOTO: A flag for presidential campaign poster for Russia’s Prime Minister Vladimir Putin hangs out of windows of a dwelling house in Moscow March 2, 2012. Russians will go to the polls for their presidential election on March 4. The flag reads “For Putin. And that’s all”. REUTERS/Denis Sinyakov