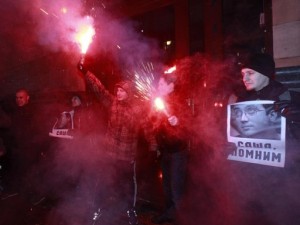 The Foreign Ministry has dismissed complaints by Human Rights Watch that Russia has completed its ‘worst year for human rights in recent memory,’ after the Kremlin unleashed what the organisation is calling its harshest political crackdown since Soviet times.  ‘Since Putin’s return […] not only has the tentative shift towards liberalization of the Medvedev era been totally reversed, but also authoritarianism in Russia has reached a level unknown in recent history.’  New tensions with the U.S. are a byproduct of Russia’s ‘campaign to dig up and cast out what it sees as the many traces of foreign involvement or meddling in Russian life,’ says The Economist.  U.S. Secretary of State Hillary Clinton is urging Russia and Iran to rethink their support for Syria, and accused Russia of continuing to deliver financial aid to the Syrian government. Clinton’s imminent replacement by John Kerry has been welcomed by Russia, which says it is ‘convinced that (his appointment) will provide good support for the development of interaction between our countries’. Jailed Pussy Riot member Nadezhda Tolokonnikova has been sent to hospital for a medical examination at the request of her and her lawyers, after complaining of headaches and fatigue.

The head of the central bank rejected President Vladimir Putin’s calls to ease monetary policy, saying that interest rates will not fall until progress is made in lowering inflation.  Prime Minister Dmitry Medvedev outlined a number of economic goals for his cabinet, calling for ‘five years of effective development’ and annual growth of at least 5%.  Putin’s plan to sell state assets could boost Russia’s stocks, says HSBC.  The volume of Russia’s online retail industry is expected to reach $25 billion by 2014.  RusHydro is proposing to create a holding company to modernise water and sewage systems.  In response to the $7 billion bill handed to it this week for unconsumed gas, Ukraine’s Naftogaz says all issues related to its 2009 gas contract with Gazprom will be settled in accordance with the terms of the contract.  The FT comments that the bill ‘might look like the Russian monopoly once again throwing its weight around,’ but is in fact a sign that the monopoly’s business model is ‘under threat’.  The head of BP in Russia, David Peattie, is leaving his post.

Volgograd will officially become the ‘hero-city Stalingrad’ on Saturday, in time to commemorate a Red Army victory against the Nazis in World War II. ‘This is an insult of the memory of those who died,’ commented the human rights ombudsman.