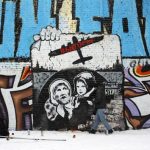 St Petersburg has all but passed a law (29-5) aimed at eliminating homosexual ‘propaganda’, sparking outrage from gay rights groups all over the world.  The head of Russia’s LGBT network, Igor Kochetkov, said: ‘Even if someone wanted to, no amount of propaganda is going to turn a heterosexual gay […] This is a law that can be used, and will be used, to conduct searches of organizations and prevent public actions.’  RFE/RL interviews Yury Gavrikov, the head of St. Petersburg’s Ravnopravie sexual minorities rights group, here. The bill still needs to be signed by the governor in order to become law. Alexei Kudrin is predicting a political future of increasingly strong leftist parties, which he says could damage the economy.  Another day, another pro-Putin party.  A regional governor insists that anti-Kremlin activities in Lermontov were funded by ‘foreign forces’.  Moscow’s City Hall is turning down opposition requests to hold central rallies on March 5, the day after the presidential vote, offering alternative sites outside the city center.  An attempt by opposition group Rosagit to hand out tents on Pushkin Square to begin a long-term protest was quickly thwarted by police; six activists were arrested and released.

Prime Minister Vladimir Putin thinks that the opposition are going to commit election falsifications in order to push the case that his win on Sunday will be unfair.  ‘These sort of people are ready to do anything. I am not exaggerating,’ he said.  Alexei Navalny says that opposition protesters will not recognise the results of the elections if Putin wins.  ‘Based on a comparison of random samplings by the Citizen Observer group and other independent observers at Moscow polling stations, the authorities inflated United Russia’s results by 11 percentage points during the Dec. 4 elections. It would be logical to expect a similar stunt with Sunday’s election.’  Leonid Bershidsky unpicks the ‘well-timed’ Putin assassination plot.  RFE/RL looks at the generation gap between pro- and anti-Putin voters, explaining that for the older generation, things appear to have changed for the better under Putin.

Reuters talks to broadcaster Vladimir Pozner, who has faced censorship in the election run-up, and more broadly looks at the openness of current Russian media.  The BBC charts the rise of LiveJournal, the blogging platform with over 2 million active Russian users, and a major source of state-influence-free political news.  Vladimir Zhirinovsky has come under fire for an unfortunate rant against an opponent.

The FSB are taking steps towards launching an electronic signature system.  President Dmitry Medvedev has signed into law a bill to toughen penalties for pedophiles, including chemical castration.  The Paris Mayor is unhappy about plans to build a Russian Orthodox church on the Seine.

PHOTO: Russian street artist P183 finishes a mural dedicated to forthcoming elections on a wall in central Moscow February 29, 2012. The words at right read “Bomb shelter” and the word on the plane reads “Elections”. REUTERS/Anton Golubev