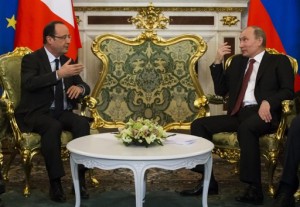 President Vladimir Putin and his French counterpart, Francois Hollande, had a ‘frank and direct’ meeting in the Kremlin yesterday, leading to a number of agreements and joint ventures.  Some disagreements over the Syrian conflict were maintained, with Hollande calling for new partners to broker talks, but insisting that the two ‘have progressed’ on the issue.  Putin suggested that the two should open a bottle of vodka before discussing the issue, because ‘a bottle of good wine wouldn’t be enough’.  There is no indication as yet that Hollande raised the question of Sergei Magnitsky with Putin, as a new poll revealed that 85% of French citizens would support their own version of the Magnitsky Act, and a number of rights activists urged Hollande to adopt such a measure, but Putin defended Russia’s human rights record to Hollande, saying, ‘I don’t think we had any problems with human rights in 2012’.  In response to accusations that he has politicised the death of adopted orphan Max Shatto, children’s ombudsman Pavel Astakhov says that calls for him to resign his post are mostly made by ‘pedophiles’.  Journalist Masha Gessen was briefly detained on suspicion of videoing classified facilities whilst visiting imprisoned Pussy Riot member Nadezhda Tolokonnikova.  One of Dmitry Medvedev’s 2011 speeches has made it onto a list of extremist materials.

Despite accusations of corruption, Russia and Iraq are to go ahead with a $4.2 billion arms deal.  According to new rankings, Yandex, Mail.ru and Utkonos are Russia’s leading Internet companies.  Alisher Usmanov’s USM raised $532 million from selling part of its stake in Mail.ru.  Is this part of a broader trend of oligarchs cashing in their assets?  TNK-BP posted a 13% drop in income for last year, which it blamed on increased export duties.  Russia has offered BP CEO Bob Dudley a seat on Rosneft’s board of directors.  Dutch-based trader Vitol will handle around half of Bashneft’s exported oil, under a new $5 billion deal.  Arkady Rotenburg, an ally of President Putin, has bought a 10.7% stake in Rostelecom, which ‘could herald a change at the top’ at the company.

Two new surveys suggest that Vladimir Putin’s current popularity as a leader is strong, but that his popularity as a future presidential candidate is dropping.  Great Britain coach Peter Eriksson wants Russia to investigate why its athletes are failing drugs tests.  The BBC reports on domestic violence in Russia. Wrestling is ‘a way out’ for Russian youths, says the Washington Post.