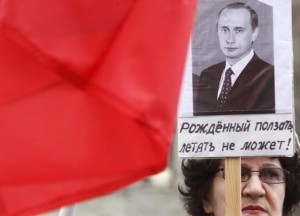 Mayoral elections in Zhukovsky were marred by reports of vote-buying and falsifications in favour of the govnerment-sponsored candidate, Andrei Voityuk.  Russia is urging North Korea and the U.S. to show ‘maximum responsibility and restraint’ after Pyongyang said it was entering a ‘state of war’ with South Korea. This piece suggests that this new development could force Russia and China to work together more closely on their own security concerns.  First Deputy Prime Minister Igor Shuvalov has announced that the government has no plans to support Russian citizens who lose funds deposited in Cyprus’ crisis-stricken banks.  President Vladimir Putin has ordered that $75 million be allocated to socially oriented NGOs working in Russia this year, after Foreign Ministry spokesman Aleksandr Lukashevich accused the U.S. of ‘undisguised interference in internal affairs’ for providing funding to Russian NGOs.  Putin’s advisors are apparently considering reintroducing the post of vice president, possibly with the aim of ‘ensuring a smooth succession of power’ when Putin’s presidential term expires in 2018.

Four people, including Eduard Limonov, were arrested at yesterday’s unsanctioned Strategy 31 demonstration on Moscow’s Triumfalnaya Square, and have since been released.  Former Soviet leader Mikhail Gorbachev says that contemporary Russian politics has ‘increasingly turned into imitation’, but says that the Kremlin will continue to face social unrest until significant changes are made.  Vladimir Putin, meanwhile, praised the Soviet Union as a land of opportunity that helped him to his current position, and spoke of wanting to ‘make education a quality means of social mobility for everybody’.  Alexander Perepilichnyy, who fled Russia after handling evidence in the high-level corruption case uncovered by Sergei Magnitsky, and died in the U.K., may have been poisoned in Paris, his associates are now claiming.  The Kremlin has reportedly been putting new laws to use by blocking internet content that it deems harmful to children from sites such as Facebook, Twitter and YouTube.  According to the vice president of Lukoil, Russia could be heading for a shale oil boom ‘on the same scale as the U.S.’ if the government comes through on promised new tax breaks.  Gazprom has accused Ukraine of using a ‘fraudulent scheme’ to carry out reverse shipments of Russian gas from the European market.

Former ambassadors to Russia and the U.S. gathered yesterday to discuss current diplomatic challenges.  The daughter of Boris Berezovsky, who was found dead last week, has spoken of her father’s ‘joy for life’.

PHOTO: An activist from the Left Front opposition party holds a sign with a portrait of Russian President Vladimir Putin during a rally demanding the release of political prisoners in St. Petersburg March 31, 2013. The sign reads, “Those born to crawl will never fly.” REUTERS/Alexander Demianchuk