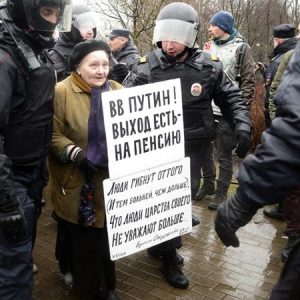 TODAY: Open Russia’s protest campaign leads hundred onto streets on Saturday, many arrested; Alexei Navalny suffering and under scrutiny after zelyonka attack; opposition activist jailed after calling for Putin to step down; Yabloko member attacked with chemicals; Foreign Ministry says US deployment of anti-missile system is a treaty violation; Montenegro angers Kremlin with NATO plans; for Vkontakte, business is booming.

Saturday’s protests, organised by Mikhail Khodorkovsky’s Open Russia anti-Putin foundation (which was blacklisted last week) have seen dozens of people arrested across the country.  The demonstrations, part of a campaign dubbed “we’re sick of him”, apparently attracted 500 people in Moscow, though police reports put the number at 250.  RFE/RL has video footage of the event, where participants called for the President to retire from politics.  Opposition leader and presidential hopeful Alexei Navalny has missed the opening of his election headquarters in the city of Astrakhan after a “zelyonka” (green ink) attack left him with a damaged cornea.  Navalny has pointed out that REN-TV has shown a video of the attack taking place, in which it blurs the face of the assailant.  The Guardian has an in-depth article on Navalny which examines the multiple reasons for his political survival – including the possibility of a “powerful backer”, allegations which he resolutely refutes.  See here for how he tackles the fact that the state refuses him airtime.  A Moscow-based activist for opposition party Yabloko, Natalia Fyodorova, has been left blinded after being attacked with an “unknown chemical”. In Tatarstan, a 23-year-old Russian opposition activist has been jailed for organizing a letter-writing campaign in which one of the demands is that President Putin does not run for a fourth term next year.

The US is apparently “deeply troubled” by Russia’s decision to blacklist Open Russia and two other pro-democracy groups as “undesirable”.  The Foreign Ministry believes that the United States’ deployment of its Aegis Ashore anti-missile systems in Eastern Europe, and plans to place more defence systems in Poland are a clear violation of Washington’s liabilities under the INF Treaty.  The hearing of a tax dispute between Russia and US oil and gas giant ExxonMobil at the Stockholm arbitration court has been delayed as the two parties continue to try to reach a settlement.  This article examines the natural sympathy between the values of American conservatives and those espoused in mainstream Russia, particularly in terms of view on gun laws, gay marriage, and the place of religion within society.  Ruslan Sokolovsky, the blogger and unashamed atheist who is facing up to 3 and a half years in jail for playing Pokemon Go in a church, has expressed shock at the length of the sentence he is facing, and defended his actions by saying, “I might be an idiot, but not an extremist”.

Russian bonds have rallied the most in nine months after the central bank accelerated a rate-cutting cycle with a bigger-than-expected reduction.  The Crimean peninsula could become a tax haven if new legislation is approved.  Montenegro, a traditional ally of Russia, which has just ratified a historic pact on NATO membership, is going to find itself with a ‘choke collar on its neck instead of an umbrella’ says a disgruntled high-ranking Russian official.  With a 45.9% increase in revenue in the first quarter of 2016, social network Vkontakte made more than $500,000 every day during the first quarter of 2017.