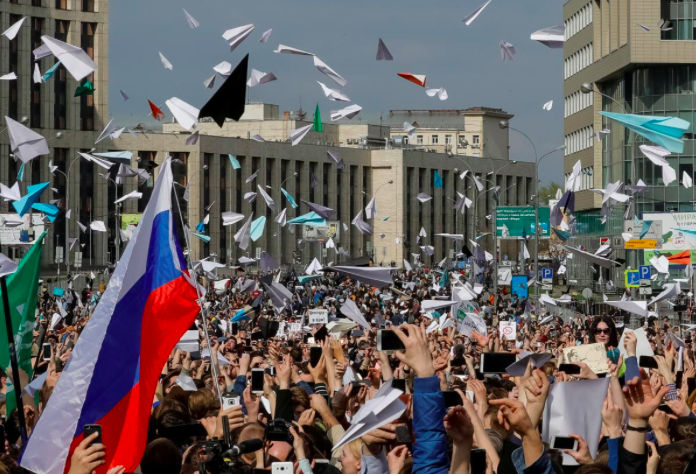 Thousands of protesters gathered in Moscow yesterday in support of the Telegram messaging app, after Rozkomnadzor disrupted various mainstream online services last week, including Google and Facebook, in a bid to block it. No one was arrested. Republic reported 7,000 people present; the Moscow Times reported 10,000; the Independent reported 12,300. The crowd brought paper planes (a reference to the app’s logo) and carried slogans against censorship, such as “Big Moron is Not Blocking You“. RFE/RL posted some video footage of the protest, which carried the hashtag #DigitalResistance. Human Rights Watch denounced the Kremlin’s blocking of millions of IP addresses in a bid to block the app as “an attack on internet freedom”. This piece discusses protest in the Russian millennial generation, dubbed “Generation P”, which stands for Putin, given that he has been in power for longer than they have been alive; it argues that Russia’s youth protest to express their frustration at political stagnation, not because Alexei Navalny tells them to. “Politicians want to create a sense of closeness to younger generations, [but] the current regime doesn’t understand that it is not the desires of the youth that need to be discussed, but how to share power with them.” In a separate protest, 200 students gathered to form a human chain in front of a Moscow State University building to protest the FIFA Fan Fest zone.

Desperate employees at sanctions-hit Rusal are reportedly panicking. “The main thing is for us to keep our jobs.” SUAL Partners, Rusal’s co-owner, is calling for a new shareholder strategy to deal with the new US measures. Metals giant Norilsk Nickel will be producing 5 million tonnes of gypsum a year by 2023 in a bid to neutralise some of the toxic gases it produces, under a new environmental law that requires it to reduce its harmful emissions by 75% or face hefty fines. Russia is shipping 20% less crude to European oil refineries in favour of China this year, says Bloomberg. The European Union plans to sanction 5 individuals that, it says, helped organise Crimean polling stations for the presidential elections.

Orthodox Church head Patriarch Kirill went to Muslim Albania for mass, and to promote religion as the antidote to terrorism. Open Democracy celebrates the Chronicle, Russia’s oldest human rights journal. Grigory Rodchenkov, former head of Moscow’s now-suspended anti-doping laboratory and a key whistleblower in Russia’s doping scandal, has filed a countersuit against three athletes who had sued him for libel, arguing that they only filed to force the revealing of his location.

PHOTO: People release paper planes, symbol of the Telegram messenger, during a rally in protest against court decision to block the messenger because it violated Russian regulations, in Moscow, Russia, April 30, 2018. REUTERS/Tatyana Makeyeva