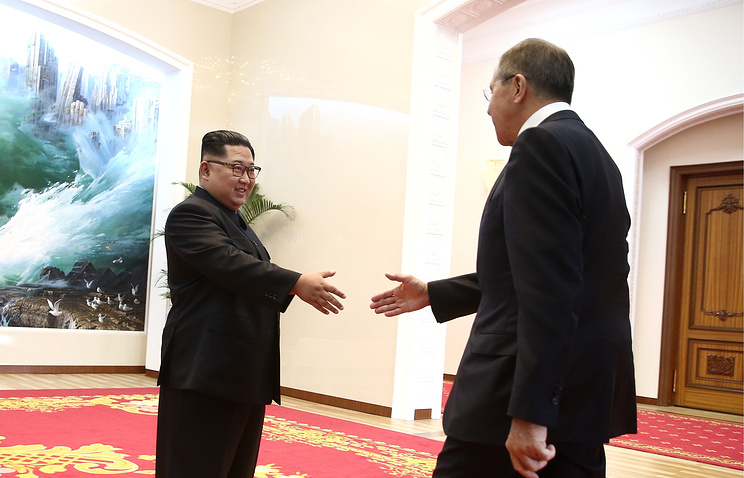 Foreign Minister Sergei Lavrov was in Pyongyang yesterday to meet North Korean leader Kim Jong-un, who expressed his appreciation of President Vladimir Putin’s strict opposition to US dominance. This was the first instance of a high-level Russian meeting with Jong-un. The pair discussed Moscow’s support for North and South Korea’s agreement to work towards denuclearisation. Lavrov said it was too early to consider a meeting between Putin and Jong-un, although he invited the latter for a Moscow visit. Briefing Russia ahead of its war games later this year, NATO maintained its position that Russia must end its “malign activities” in Europe; the President of the European Commission, conversely, called for an end to “Russia-bashing” and a renewal of ties. The founder of popular messaging app Telegram, which Russia has been seeking to ban since last month, says Apple has been complying with Russian authorities and preventing the app from updating globally since April. “Unfortunately, Apple didn’t side with us,” he said. Despite an overall crisis in the banking sector, Sberbank reported record profits for the first quarter of 2018. Oleg Deripaska’s aluminium empire will not be able to come up with a plan to meet US requirements and escape sanctions until mid-summer.

As social media responded with memes to the resurrection of journalist Arkady Babchenko, whose murder was faked by Ukrainian special forces in order to thwart a plot to kill him, the Kremlin commented on the case: “Thank God, the man is alive,” said spokesman Dmitry Peskov, “but that does not change our view of Ukraine as a country dangerous for journalists. […] I don’t know whether the ends justify the means in this particular case.” Ukraine has named and detained the man accused of being recruited by the Russian secret service to organise Babchenko’s murder plot. Babchenko has dismissed criticism from other journalists (including the IFJ) who said the trick was immoral, countering that it was worth it to save his life. RFE/RL discusses allegations that Russia has been in the process of enacting demographic transformation in Crimea since its annexation.

A former CIA deputy discusses Russia’s maskirovka, or “doctrine of deception”, as a foundational strategic concept. Currently, 2.3 million Russians are banned from traveling abroad over their unpaid debts; the law applies to anyone who owes more than $483 in unpaid bank credit, taxes, or fines. Saratov Airlines has had its license annulled following the deadly crash this February.