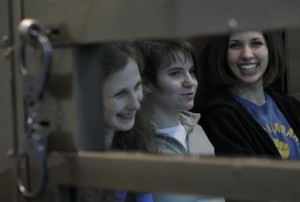 A Moscow court is hearing the appeal by the three jailed members of protest group Pussy Riot today.  The Orthodox Church has called on the women to repent, suggesting that it would support a reduced sentence ‘if any words of the convicts indicate repentance’.  A theatre in Rostov has dropped a production of the musical Jesus Christ Superstar following Orthodox protests.  The government’s working group wants extreme rules on restricting Internet content, pushing for blocking whole websites featuring restricted content, rather than individual web pages.  Lawmakers have voted in favour of barring opposition Deputy Ilya Ponomaryov (creator of the now famous ‘crooks and thieves’ accolade for United Russia) from speaking in the Duma for a month.  Ponomaryov writes in the Moscow Times about his dismissal.  Lawyers for four Other Russia activists convicted of inciting riots in Moscow have appealed to the European Court of Human Rights.

AAR has hired Rothschilds Group to arrange a loan syndication that would enable it to buy out BP’s share of TNK-BP.  Russian investments are prone to ‘violent “risk on” rallies or “risk off” falls’, says the Independent, but ‘valuation should, in the end, be the safety net’.  Russia is planning to spend almost $20 billion on the 2018 World Cup.  The Kremlin is planning to reduce the funded component of state pensions from 6% to 2%, to avoid a budget deficit.

Georgian opposition candidate Bidzina Ivanishvili made his fortune ‘in Russia’, and is accused by the current government of having political ties there.  Five people were detained at a rally in support of political prisoners, three of whom escaped.  The United States Agency for International Development (USAID) ends it Russian operations today as requested.  The Putin-loyal, nationalist ‘Putin’s Special Force’ party, canceled by the Kremlin six years ago, has been reinstated.  Over 230 drunk drivers were arrested in Moscow over a period of just 24 hours this weekend.