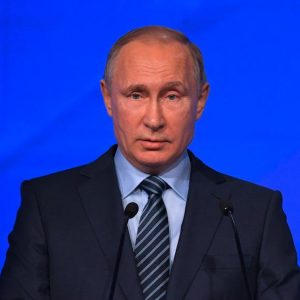 President Putin’s annual state of the nation address is underway – the Moscow Times is offering a live blog. Earlier this week the President’s spokesman Dmitry Peskov said that this year’s address would ‘be very different in content’ from the addresses of previous years, although ‘the backbone of it will remain unchanged.’  Thus far one tweeter has noticed, ‘Putin began coughing earlier than usual’.  The President has honed in on social issues in the first part of the speech, mentioning education, the health system and better protection for the environment.  Having noted that this year marks the hundredth anniversary of the Bolshevik revolution, he urged the nation to be unified.  ‘Putin is the locus of power and the agent of continuity or change.  Every problem, large or small, has to come to Putin’s attention’ says an analyst examining his leadership style in the Washington Post, and this kind of televised event is one way of communicating this.  Sanctions, according to the President, are not the factor hindering Russia’s economy.  They will still hinder Putin’s ally Arkady Rotenberg, according the latest update on his appeal, however.

The President has named 34-year-old former Deputy Finance Minister Maxim Oreshkin the new economic development minister, two weeks after the arrest of Alexei Ulyukayev on corruption charges.  The appointment of the technocrat, apparently a macroeconomics whizz, has not shed as much light as hoped on his predecessor’s departure since it is clearly not a political manoeuvre, the Moscow Times says.  According to the CEO of tech giant InfoWatch, despite concerns about data privacy, data on the Russian internet should belong to the Kremlin.  ‘The dawning of Russia as a cyber power is at a whole other level than it ever was before’: says U.S. based cybersecurity export David DeWalt, ‘We’ve seen what I believe is the most historical event maybe in American democracy history in terms of the Russian campaign’.  The U.S. House of Representatives has approved a proposal to set up a body to monitor and reduce Russian political interference around the world.  Learn more about Russia’s ‘sovereign technology’ here.  Kremlin-backed news outlet RT will reportedly be handed an extra $19 million in state funding over the next two years.

In response to news of Ukraine holding missile tests, warships from Russia’s Black Sea Fleet have moved to Crimea’s western coastline.  After Russia registered anger at the tests, Kiev has now assured Moscow that its military will avoid the airspace over Crimea.  The Foreign Ministry is concerned that the issue of humanitarian aid in Syria is becoming increasingly politicised.  ‘After enduring three years of a foundering economy and feuds with the West, things may be looking up for Russia’, says Stratfor, which offers a full analysis of why Moscow’s prospects are brighter.