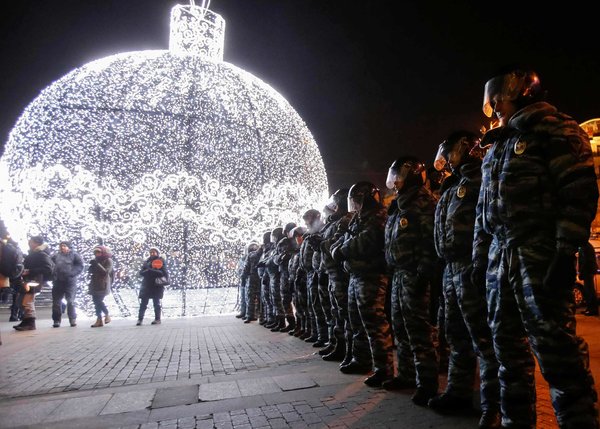 The trial of anti-corruption campaigner and opposition figurehead Alexei Navalny, and his brother Oleg, concluded earlier this week as the pair were sentenced. The court decision was brought forward by two weeks, possibly to surprise supporters who had vowed to protest in the wake of the ruling.  The shocking verdict – in which Alexei escaped with a suspended sentence, but his brother was sentenced to jail – has drawn widespread criticism and suspicion. ‘For many Russians, and not only those sympathetic to Navalny’s cause, this apparent inconsistency echoed notorious Soviet-era tactics, where the perceived sins of one family member were visited on others,’ writes Mary Dejevsky, with a sentiment immediately understood by Alexei, who shouted ‘Why are you jailing him? Is that to punish me more?’ He later described it as ‘the most disgusting and vile of all possible verdicts’.  The verdict appears to have galvanized the Navalnys’ supporters, with thousands answering Alexei’s call to protest the ruling and gathering for an unsanctioned rally in Moscow’s Manezh Square on Tuesday night, with chants of ‘Putin is Russia’s shame!’ Many were detained – including Navalny himself, as well as Pussy Riot activist Maria Alyokhina.  This piece says that the Kremlin are starting to use social media tags to find and intimidate those who express or support anti-Kremlin sentiments.

President Vladimir Putin’s New Year’s speech, (which also marks the anniversary of his 15 years in power, and his tenth consecutive year as head of the Russian elite) praised his citizens’ patriotism and welcomed Crimea’s ‘return home’, and lingered over the triumph of the Sochi Winter Olympics. Putin’s New Year’s message to U.S. President Barack Obama was optimistic about bilateral relations for the coming year; but Obama made an unfavorable mention of Putin in a holiday interview with NPR, saying that the economic crisis proves his lack of genius.  Vladimir Putin was named corruption’s ‘person of the year’ by an international group of investigative journalists at OCCRP. ‘You might consider this a lifetime achievement award.’ According to Russia’s new military doctrine, NATO is the country’s top military threat.

The Kremlin bought almost 40 billion rubles worth ($720 million) of shares in Gazprombank this week, and is planning to give a $1.7 billion capital boost to VTB.  ‘Russia, in other words, is stuck in an economic catch-22. It can’t afford to spend too many dollars bailing out its currency when it needs to use that money to bail out its companies,’ says the Washington Post.  Russian equities made for some of the world’s worst-performing stocks last year, according to MSCI.  Barclays Capital is predicting that with interest rates already at 17%, Russia will have to use its foreign currency reserves to control inflation this year.  This syndicated story paints a grim picture of Russia’s economic inequalities and fraying infrastructure.

Natalie Nougayrède remembers Memorial activist Natalia Estemirova in her appeal to save the organisation.