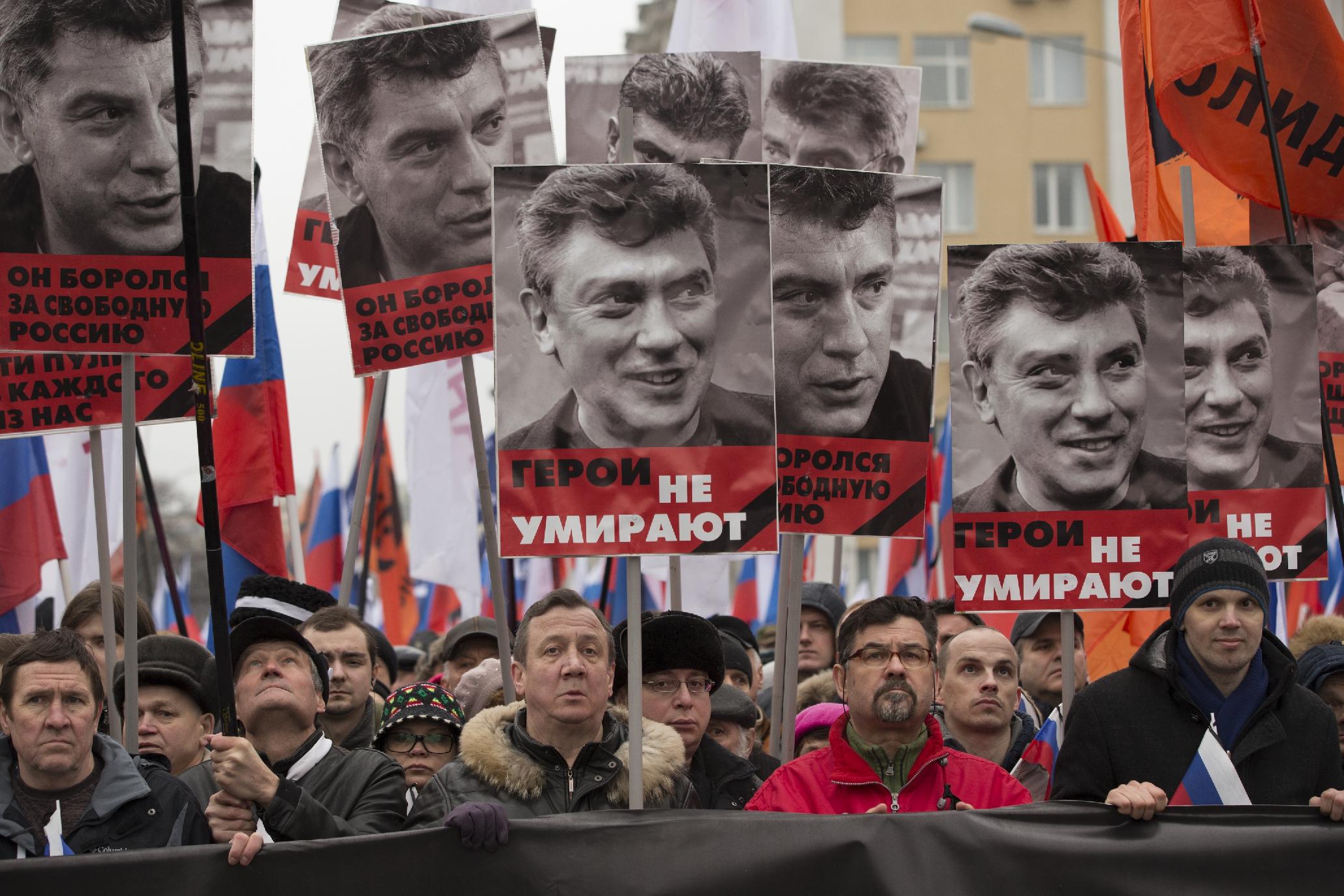 Somewhere between 21,000 and 50,000 protesters marched through Moscow yesterday in honor of Boris Nemtsov, the outspoken Kremlin critic, opposition leader and former politician, who was shot in the back and killed on Friday night, outside the Kremlin.  At the rally, which Nemtsov had originally organised in support of Ukraine, protesters carried signs reading ‘Heroes do not die’, and ‘Propaganda Kills’, a reference to a media climate of hatred which, says Leonid Ragozin, supports the murders of political opponents by labeling them as enemies of Russia.  Masha Gessen agrees, citing the Anti-Maidan march two weeks ago which called for violence against the ‘fifth column’, with some at that time naming Nemtsov as the organiser of the Ukrainian revolution.  (Incidentally, an informal online poll by the Anti-Maidan Organisation found almost half of respondents certain that the United States had arranged his killing.) Ukrainian President Petro Poroshenko says Nemtsov was murdered because he planned to reveal evidence of Russia’s involvement in the Ukraine conflict.  By telegram, President Vladimir Putin promised Nemtsov’s mother that her son’s killers would be found and punished, and praised his role in Russian history.  ‘Putin’s immediate reaction to Nemtsov’s killing shows signs of fear of the control slipping out of his hands. He should launch a war on extremists and engage with the moderates,’ writes Vladimir Frolov.  Just hours before he was killed, Nemtsov gave an interview to Ekho Moskvy in which he spoke about Putin’s ‘insane’ policy of war with Ukraine, accused him of disowning the soldiers that are dying for him in Ukraine, and called the President a ‘pathological liar’, arguing that a well-attended march would send a message of peace to the Kremlin.  In a separate interview on February 10, Nemtsov told the Sobesednik news website that he feared Putin would kill him.  Former government minister Vladimir Milov says Nemtsov’s death could have been sanctioned by none other than Putin.

With Nemtsov dead, Mikhail Khodorkovsky exiled, Alexei Navalny on suspended sentence, and Sergei Udaltsov in prison, the Guardian asks, who is left to take on Vladimir Putin?  Garry Kasparov (also exiled) says the murder has dampened all hope of a peaceful political transition in Russia away from Putin’s government: ‘It’s a signal to everybody that’s engaged in opposition activities that all bets are off.’  Maxim Shemetov: ‘This murder was calculated political violence. The location, the timing and the execution of the murder attest to this.’  Ilya Yashin called the murder ‘an act of terror.  It is a political murder aimed at frightening the […] part of the population that supported Nemtsov’.  The irony of Nemtsov being shot in the back is that ‘he was never hiding behind anybody’s back’, writes Anna Nemtsova. ‘[H]e fought with love, with sharp examples, his independent investigations and with his powerful words.’  Roskomnadzor has unblocked the website of Alexei Navalny after its calls for participation in unsanctioned mass rallies were removed.

The former chief executive of BP, John Browne, has been hired by Mikhail Fridman’s $10 billion L1 Energy venture to help it expand internationally.  Britain has blocked Fridman’s attempt to buy 12 oil and gas fields in the North Sea as part of their acquisition of Germany’s oil firm DEA.  Tycoon Sergei Pugachyov, the so-called ‘Kremlin cashier’, must disclose information about his trust income, says a London court.

PHOTO: People march in memory of opposition leader Boris Nemtsov who was gunned down on Friday, Feb. 27, 2015 near the Kremlin, with portraits of him and words reading ‘He died for freedom to Russia, heroes never die!’ in Moscow, Russia, Sunday, March 1, 2015. (AP Photo/Pavel Golovkin)