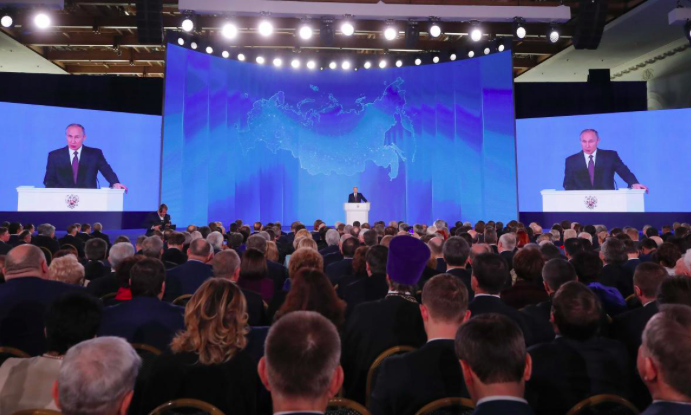 President Vladimir Putin gave his longest ever annual address to the Federal Assembly yesterday, setting out Russia’s goals for the next six years in what some say functioned as a campaign speech in advance of his reelection in just two weeks. He promised high levels of spending on infrastructure, healthcare and social security, and vowed to make it his focus to improve Russians’ quality of life, including a pledge of $60 billion to support families (the New York Times called his speech “long on economic promises and short on specifics about how to finance them”). The Moscow Times has extracted some key morsels. The length of time he spent talking about Russia’s nuclear missile capacity has raised eyebrows. He presented videos of new weapons to applause from the crowd; but the US says it is fully prepared and that none of the speech came as a surprise. One segment of Putin’s video was apparently made in 2007; another apparently depicted an animation of nuclear missiles descending on the West coast of Florida; the Mayor of Tampa said he would “write it off as overheated rhetoric designed to prop up his failing regime”. A Russian analyst expressed concern that the West would mistake Putin’s address as “an attempt to show muscle” and that the address, in fact, contains “several hints” that the West can use if it wants to step up cooperation.

The head of Moscow’s union of journalists has dismissed sexual harassment allegations against State Duma Leonid Slutsky for being made too late. Slutsky himself says he is innocent, and described the allegations, made by at least four female journalists, “a hit job”. Finance Minister Anton Siluanov says Russia has no plans to increase its defence spending. A new report by House Republicans in the US claims that Russia used inflammatory social media posts to incite activists to protest pipeline projects. Forbes reports on Ukraine’s “shock” win against Russia in the form of the Stockholm order for Gazprom to pay out $2.5 billion to Natfogaz.