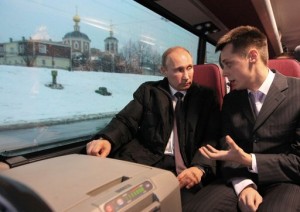 Billionaire businessman and politician Mikhail Prokhorov is demanding a revote of the Zhukovsky mayoral elections after a candidate from his Civic Platform party lost amid allegations of vote fraud.  Deputy Prime Minister Dmitry Kozak dismissed Greenpeace allegations that construction waste is not being properly disposed of at the Sochi Olympics site: waste is, in fact, being buried in the nearby town of Belorechensk, to be processed at a later date, he says. ‘There are no problems with that.’  Roskomnadzor, the communications watchdog, has withdrawn a previous threat to block Facebook after the network complied with demands to remove a page on suicide.  Masha Gessen discusses the recent raids on foreign-funded NGOs, and suggests that civil society in Russia is dependent on U.S. involvement.  The Guardian suggests that ‘The whole televised charade seeks to portray Russia’s political opposition as foreign-sponsored.’  The girlfriend of Boris Berezovsky, whose death police say was consistent with hanging, says that she does not believe he committed suicide, that he had been making extensive future plans, and was due to meet with his daughter on the day of his death.  This BSR report also contests that his death was accidental, and says that Berezovsky was visited by two MI6 intelligence agents the evening before his death.

Thanks to backing from Vladimir Putin, Alexander Bastrykin’s Investigative Committee ‘appears to have a free hand’, says this report.  A Moscow court has ruled that the house arrest of opposition leader Sergei Udaltsov will be extended throughout the summer.  Mobile operator MTS joined forces with its rival, Vimpelcom, to make a $4.25 billion bid for the Russian unit of Tele2.  Swedish bank Swedbank is discontinuing its Russian operations.  Lukoil is buying the Samara-Nafta division of Hess Corp, which produces 50,000 barrels of oil a day, for a reported $1.8 billion (other sources put the figure at $2.05 billion).

The Defence Ministry is reportedly mulling a return to Afghanistan by establishing military ‘maintenance bases’ there, almost 25 years after Soviet troops left in defeat.  ‘But Russia must never repeat its past mistakes.  There cannot again be any Russian troops in Afghanistan.’  Experts in Moscow are analysing the autopsy report for Russian adoptee Max Shatto who died in Texas earlier this year.

PHOTO: Russian President Vladimir Putin (L) speaks with a student from the Federal Baltic University on a bus during his meeting with students in Moscow April 1, 2013. REUTERS/Mikhail Klimentyev/RIA Novosti/Pool