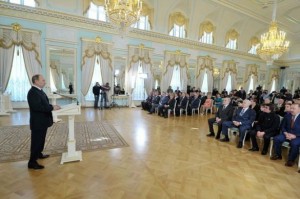 In what was supposed to be ‘a demonstration of Putin’s power’, yesterday’s May Day celebrations saw hundreds of thousands of people gathering all over Russia to join various pro-Kremlin and state-sponsored marches.  Police estimated that 90,000 people marched in Moscow (upping their earlier estimates of 70,000), and 150,000 in St. Petersburg, with larger marches in Chechnya.  The Communist Party held a smaller opposition rally in Moscow.  The Guardian has some video of the processions in Moscow which, says one participant, are held in honour of ‘the future’.  200,000 police were deployed all over Russia to ensure order, with 10,000 active in Moscow alone.  Putin marked the day’s celebrations by handing out Soviet-style Hero of Labour awards to a neurosurgeon, a machine operator, a mining foreman, and the director of the Mariinsky Theatre.

A new report by U.S.-based organisation Freedom House indicates that global media freedom is at its lowest point for a decade, and accuses the Russian government of having almost ‘complete control over television, radio, and the print press’.  Journalist Masha Gessen is reportedly leaving her job at Radio Free Liberty in order to work on a book about the accused Boston bombers, the Tsarnaev brothers.  Part of increased contact between U.S. President Barack Obama and Vladimir Putin involves renewed pressure on Russia to lessen its support for the Syrian regime.  Russia is building up its nuclear forces, as the U.S. prepares to launch a new round of cuts.

Former opposition Duma deputy, Vladimir Bessonov, has been accused of beating a police officer in Rostov-on-Don during a December 2011 rally. ‘It was not immediately clear why it took the investigators about two years to file the charges against the politician.’  A number of Russia’s richest businessmen are using offshore havens to protect their assets from the state.  Russian Olympic discus silver medallist Darya Pishchalnikova has been banned for ten years for doping.