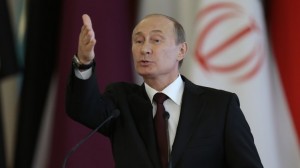 President Vladimir Putin said again that NSA whistleblower Edward Snowden must find a country in which to seek asylum and then leave Russia as soon as possible.  Putin says he will not hand Snowden over to the U.S., but that he must stop leaking sensitive information and ‘harming our American partners’.  The Federal Migration Service is denying reports that Snowden is seeking political asylum from Russia itself.  Opposition candidate for Moscow mayor, Alexei Navalny, launched his campaign yesterday with a half-hour speech slamming state theft and hypocrisy and pledging that he is ‘totally serious about this election’, before boarding a train to appear at his trial in Kirov. Some reports say he was joined by ‘100 supporters’, others say ‘hundreds’. The mother of Mikhail Khodorkovsky has spoken of her ‘contempt’ for Russia’s ‘KGB government’.

Anna Kotova, an official at the Justice Ministry, says that NGO checks are needed because many of the organisations operate as ‘fronts’ for illicit activity.  Human Rights Watch is calling on the authorities to investigate the legality of last week’s raid on the organisation For Human Rights which, says Vladimir Ryzhkov, ‘was a flagrant violation of the law’.  Amnesty International has responded to Russia’s new anti-homosexuality laws, calling them ‘an affront to freedom of expression and an attack on minority rights’.  Some conservatives in the U.S. apparently support the new law, which bans ‘homosexual propaganda’, with one organisation leader saying ‘We want to let [Russia] know they do in fact have support among American NGOs (non-governmental organizations) on social issues’.

At a global summit of gas companies held in the Kremlin, Vladimir Putin defended long-term supply deals as foundational to global energy security, and urged exporting companies to club together to face the challenge of soaring U.S. shale gas production and potential loss of commerce from Europe.  Gazprom missed a target date for finalising the terms of its long-awaited supply agreement with China, pushing the deadline back to September.  Under its five-year development plan, the Culture Ministry pledged that by 2018, a quarter of all movies shown in Russia will have been domestically made.  The crash of an unmanned Russian rocket in Baikonur will create losses of $200 million.