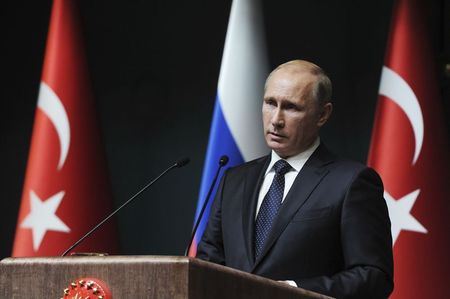 President Vladimir Putin has announced that Russia will scrap construction of the long-awaited $22 billion South Stream gas pipeline to Europe, and redirect it to Turkey, which will in turn receive a number of energy price discounts.  Putin blamed the ‘counterproductive attitude’ of the European Commission for the failure of the project, and portrayed the news as Europe’s loss; the New York Times sees it as a diplomatic defeat for Russia; the British Times says this means ‘gas war’.  RFE/RL explains why Putin and his Turkish counterpart, Recep Tayyip Erdogan, make a good pair.  The Energy Minister has said that he is not aware of any pre-payments from Ukraine for its winter gas supplies as yet (the deadline was yesterday).  Russia and NATO have each traded accusations that the other is causing instability – Russia in Ukraine and NATO in northern Europe and the Baltics – in conjunction with the news that Russia will hold more military exercises next year than it did this year.  Kiev says it has reached a truce with pro-Russian separatists in eastern Ukraine.  Moldova’s election results show a clear turn towards Europe, away from Russia.

The ruble suffered its biggest one-day decline since 1998 yesterday, dropping 6.5% against the dollar and forcing the Central Bank to intervene.  ‘The word “freefall” is much overused in financial markets. Not this time.’  Former BP boss Lord Browne tactfully told the BBC that Russia’s economy is diverse and complex, and that the new lows in the oil price won’t be enough to seriously damage it.  Prime Minister Dmitry Medvedev has authorised the privatisation of a 19.5% stake in Rosneft.  A new poll indicates that Putin’s ratings are starting to drop.  The New Yorker’s new profile of German Chancellor Angela Merkel quotes her withering comment about a 2007 incident in which Vladimir Putin took advantage of her fear of dogs. ‘I understand why he has to do this—to prove he’s a man. He’s afraid of his own weakness. Russia has nothing, no successful politics or economy. All they have is this.’  A Moscow court has ordered the arrest of anticorruption lawyer Andrei Stolbunov, who is currently seeking asylum in the U.S.  Danone was ‘deeply insulted’ by Russia’s comments about its ingredients and is demanding a retraction.

Russia will never teach sex education in its school curriculum, says children’s rights ombudsman Pavel Astakhov.  Russia has ranked sixth in an Australian report on trafficked sex worker populations.  St. Petersburg’s iPhone monument to Steve Jobs is to be sold at auction and removed from Russia.  U.S. company Fathead is considering legal action after its television advertisement was manipulated to tow an anti-gay rights line.  A Picasso for a World Cup vote?