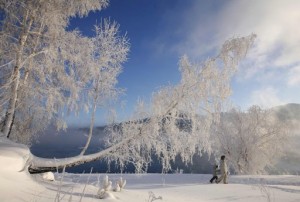 Reversing an attempt by former President Dmitry Medvedev to impose mandatory retirement at 60, President Vladimir Putin has signed a new law allowing senior government officials to serve until the age of 70, leading critics to accuse him of attempting to create a gerontocracy.  ‘Mr Putin has faced jibes about his own age.’  Putin has also ordered a change in the rules for parliamentary elections, to be unveiled in the coming weeks, which will replace strict party-list voting and ‘insulate him from dwindling public support for United Russia’.  He also increased the limit for business visas from one to five years, and has signed a law imposing heavy fines for ticket touts at the 2014 Winter Olympics in Sochi.  Russia’s oil output was the highest in the world last year, ahead of Saudi Arabia, largely due to a push by state-owned Rosneft (which will also become the world’s largest oil producer this year after it completes its acquisition of TNK-BP).

‘If 2012 was all about politics, 2013 will also be about economics,’ says Brian Whitmore. ‘Energy experts and economists say Russia’s budget will only stay balanced if oil prices remain between $100 and $110 per barrel.’  A Barclays economist suggests that 2013 will be a relatively weak year overall for the BRIC economies.  Despite a poor harvest, Russia will not ban grain exports this year – a sign that leaders recognise that the post-2010 embargo was ‘a mistake’.  The naval exercise scheduled for the end of this month, will be Russia’s largest in decades.  On Russia’s ‘new Cold War’ with the U.S., and how ‘the Magnitsky and the orphan act are going to make it impossible to have a discourse in America about Putin’s leadership in a way that would lead to any cooperation between Obama and Putin.’  Bloomberg says the Dima Yakovlev bill ‘reflects a worrying defensive and isolationist trend in President Vladimir Putin’s foreign and domestic policies.’

Was Rasputin killed by the Tsar’s nephew?  Heating supplies to 30 apartment blocks housing roughly 7,000 people in Nizhny Novgorod have resumed after a pipe rupture earlier this week.

PHOTO: A woman walks with her child on the banks of the Yenisey River in air temperatures of about minus 30 degrees Celsius (minus 22 degrees Fahrenheit) during winter outside Krasnoyarsk. (ILYA NAYMUSHIN/Reuters)