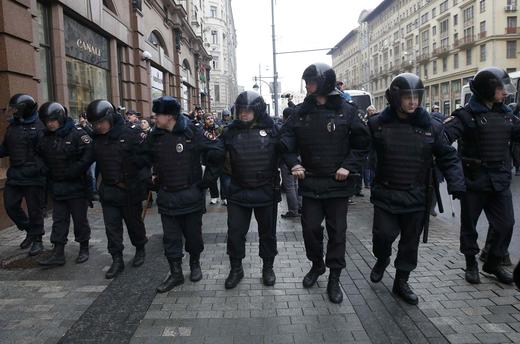 Moscow police detained 31 people in Triumfalnaya Square yesterday, and 7 more near Manezhnaya Square, for holding unauthorised rallies. RFE/RL has video of the detentions. Activist Ildar Dadin was also detained (and subsequently released) in Moscow for holding a one-man picket. The Investigative Committee has opened a criminal investigation in its bid to identify those who called for the demonstrations (“actions of a severely extremist nature“) to begin with. Federal attorneys had already instructed Roskomnadzor to block social networking pages promoting unsanctioned rallies. The French polling commission has issued a warning over a Sputnik article from last week which alleged, contrary to mainstream polls, that conservative candidate François Fillon is leading the race for the presidency. “It is imperative that publication of this type of survey be treated with caution so that public opinion is aware of its non-representative nature.” The Central Bank last year purchased more gold than any other country. Michael Flynn, the former national security adviser to US President Donald Trump, failed to disclose income from Russian companies in a February financial disclosure form.

The BBC spoke to one of the members of Alexei Navalny’s Anti-Corruption Foundation, on the need to use the Internet to bring news to young Russians. “[A]ll this pressure actually mobilises us, because if they are pressuring us, it means we are doing something right.” On the occasion of its current editor stepping down to be replaced by someone from Kremlin-run Channel One (widely seen as a bid to silence critical voices at the paper), the Moscow Times profiles Vedomosti. The WSJ has posted an essay by Kremlin opponent Vladimir Kara-Murza, in which he compares the Kremlin with a third-world dictatorship.  Two of the Russian construction companies building 2018 World Cup facilities in St Petersburg are allegedly using North Korean slave labour. Poet Yevgeny Yevtushenko has died, aged 84; the Guardian and the New York Times have colourful obituaries. Russia’s Yevgenia Medvedeva defended her world figure-skating title in Helsinki this weekend, breaking her own world record.

Dmitry Peskov says Russia’s poor reputation in the US is a direct result of America’s anti-Russian propaganda. “[T]hat’s why lots of Americans, they do think that, yes, Russian hackers are everywhere. Russian hackers are in every fridge,” he said. The Foreign Ministry proved it has a sense of humour by posting an April Fools’ audio recording of a new automated phone service offering to direct callers to hackers and election interference services, and advising, “To arrange a call from a Russian diplomat to your political opponent, press one.”  Two quibbles with Vladimir Putin’s use of a Ronald Reagan quote to defend Russia yet again against allegations of election interference: 1) it wasn’t a Reagan quote, 2) Reagan broke his promise.