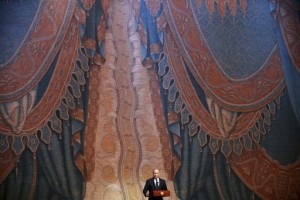 A spokesperson for China’s Communist Party has slammed Japanese Prime Minister Shinzo Abe’s recent visit to Russia as ‘a naive attempt to contain China’, supposedly spurred by Chinese concerns about Russo-Japenese energy tie-ups.  India’s liquefied natural gas importer, Petronet, is seeking a supply deal with Gazprom to diversify imports.  Oil output came close to another post-Soviet record last month.  The European Union is considering adopting a sanctions list for Russian officials, akin to America’s Magnitsky List, but Foreign Minister Sergei Lavrov says that rumours about a crisis in relations with the E.U. are ‘extremely exaggerated’.  An open letter by Russia’s top child psychologists appeals to Vladimir Putin to allow the completion of around 100 adoptions of Russian children by U.S. parents which were already in process when the ban was introduced.  Ireland has dropped its plans to impose Magnitsky List-style sanctions on Russian officials, after Russia countered by threatening to ban Irish adoptions of Russian children.

During a visit to London, Deputy Prime Minister Vladislav Surkov spoke up in defense of the Skolkovo business center as one of Russia’s ‘cleanest’ (i.e. corruption-free) projects, saying that the public face of the project, Viktor Vekselberg, is too rich to have any corruption-related incentives.  He also proudly said that the Kremlin’s political system had successfully beaten its opposition.  President Vladimir Putin attended a gala opening of the new Mariinsky Theatre in St. Petersburg yesterday, praising it as ‘one of the flagships of Russian culture’, and said that the theatre’s vibrancy was due to ‘the charm of modern technology’.  RFE/RL has images of the old and new theatres.

Russia has placed ninth on the Committee to Protect Journalists’ annual Impunity Index, which notes that fourteen journalist murders since 2003 as yet remain unsolved.  Rivers Without Borders, the Amur River conservation group run by Yevgeny Simonov, has received a British environmental award.  Mary Dejevsky says that post-Soviet Russia is ‘self-taught in today’s diplomacy and badly needs to be socialised’.