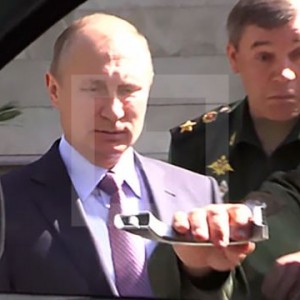 Allegations made in the New York Times by Grigory Rodchenkov, the former director of Russia’s anti-doping agency, that the Sochi Olympics were riddled with doping, have been described by the Ministry of Sport as ‘a major shock’.  The International Olympic Committee wants to investigate immediately the ‘very worrying’ claims.  ‘As presidential inspections of Russian military equipment go, this was not a good one’: despite a handle falling off one of the military vehicles he examined at a meeting with defense leaders in Sochi, President Putin has praised the domestic arms industries for largely meeting production goals for new weapons.  Russia has signed an international agreement on the exchange of financial information in an attempt to stymie tax evasion.  A new initiative by British Prime Minister David Cameron to crack down on the influx of dirty money into the UK may expose real estate holdings of Putin allies such as deputy prime minister Igor Shuvalov and members of the wealthy Rotenburg and Yakunin families.  In the Guardian, Kremlin critic Garry Kasparov warns that a Brexit would be a boon to President Putin.

Agriculture watchdog Rosselkhoznadzor is getting ready to ban all fruit and vegetables imports from Turkey next week.  Moscow is refusing to back the commitments to be adopted at the first World Humanitarian Summit in Istanbul on May 23-24, on the basis that the UN Secretariat ignored its views in the preparation of the summit.  RFE/RL reports that yesterday pro-Russian authorities in Ukraine’s Crimean Peninsula blocked access to its Crimea news website.  This article wonders why Western news outlets have proved so uncritical of Russia’s interpretation of events in Syria.  ‘I am convinced that the politicians currently in power in Russia are destroying my homeland, and that is why for me, they are the enemy’: writer in exile Boris Akunin talks to Deutsche Welle about whether political change is possible in Putin’s Russia.

The Moscow Helsinki Group, started by some of the Soviet Union’s bravest dissidents, is marking the 40th anniversary of its founding in 1976.  In an interview with RFE/RL, founding member and continually active campaigner Lyudmila Alekseyeva looks back at how it all began.

PHOTO: Russian President Vladimir Putin looks on, bemused, as the handle on the door of the armored SUV comes off in the hand of General Aleksandr Shevchenko, while the chief of the Russian Armed Forces General Staff, General Valery Gerasimov, looks on, appalled, in Sochi, May 12, 2016. (life.ru videograb)