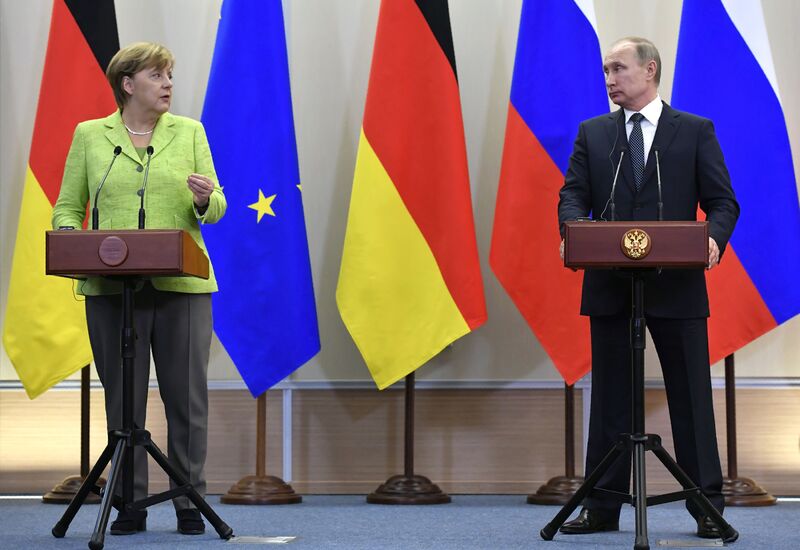 German Chancellor Angela Merkel met with President Vladimir Putin in Sochi yesterday for a “clash” over Ukraine, gay rights, and election meddling, during which Merkel said that European sanctions on Russia would stay. Putin defended the behaviour of Russian police at recent anti-Kremlin protests to Merkel, saying that they behaved “in a far more restrained manner than their colleagues in other European countries”. In the ensuing press conference, Putin yet again denied allegations of Russian interference in last year’s US presidential elections. Putin spoke with US President Donald Trump yesterday to discuss Syria, in what was described as a productive conversation. The US says it has no plans to prepare a new round of sanctions against Russia. A Russian military expert claimed that Russia has been “seeding” nuclear bombs off the coast of the US; the Kremlin found the allegations “strange”. Marine Le Pen is the favourite French presidential candidate for the majority of Russian citizens.

Opposition leader Alexei Navalny is filing official complaints against the Moscow police, alleging that they are not investigating the chemical attack against him last week, which may have permanently damaged his eyesight. The number of mentions of Navalny in the Russian press has increased fivefold since the end of last year. Schoolchildren in Vladimir have been warned that they could be taken away from their parents for visiting Navalny’s political headquarters or disseminating information about him. “Putin is war,” according to an 82-year-old protester, who says the President was her idol until she was punched by a riot policemen in 2012. Roskomnadzor has blocked several messaging apps in Russia including BlackBerry for failing to comply with the law.

The head of the European Bank for Reconstruction and Development says he does not see an end to the freeze on Russian investments in the near future. The BBC reports on controversial Russian treatments that supposedly “cure” gay people.

PHOTO: Vladimir Putin and Angela Merkel give a press conference following their meeting at the Bocharov Ruchei state residence in Sochi, Russia, on May 2, 2017. (Alexander Nemenov/AFP/Getty Images)