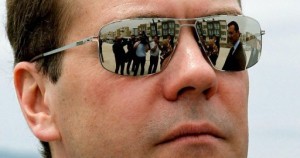 A poll newly released by Associated Press-GfK (based on the responses of 1,675 randomly-selected citizens) shows Russia divided over Vladimir Putin, with 60% of Russians overall backing their leader, but only 38% of Muscovites showing the same support.  Lyudmila Alexeyeva, the ‘grandmother of Russia’s human rights movement’ speaks to the New York Times about her decision to quit the presidential human rights council last week, blaming Kremlin interference.  Mikhail Fedotov, who chairs the council, is urging his remaining colleagues not to do the same.  Alexeyeva says that if a new bill about foreign-funded NGOs is passed, her 36-year-old organisation will refute the term ‘foreign agent’: ‘Let them shut us down if they want. We are not agents of foreign governments. We protect the rights of our citizens when their rights are violated.’

Provincial opposition leader and rehab clinic owner Yevgeny Roizman is the target of a police investigation for criminally negligent manslaughter after a woman died leaving his clinic, although he blames the case on corrupt authorities, alleging daily harassment.  Defense Minister Anatoly Serdyukov apparently ‘put Medvedev in his place’ at the Prime Minister’s visit to a military compound in Pokrovskoye last week – a form of reverse hazing, suggests Alexander Golts.  This Bloomberg opinion piece says that linking the repeal of Jackson-Vanik to the Magnitsky Act ‘would do more harm than good’, and that the latter should only apply to Russians linked to the case.  Another questions the bias of Russia Today’s reporting on Syria.

Vladivostok is now the home to one of the world’s longest suspension bridges, unveiled by Dmitry Medvedev yesterday, who praised its Russian contractors. ‘Foreigners can’t be trusted to do things well.’  Medvedev says that the city’s new infrastructure reminded him of San Francisco, although ‘Vladivostok is probably better than San Francisco […] our people are definitely better.’  Yesterday was the 75th anniversary of the beginning of the Great Terror under Josef Stalin; RFE/RL interviews the chairman of rights group Memorial about these events and their meaning today.  An exhibition in Cambridge, U.K., showcases the work of political propagandist and cartoonish Maksim Vladimirovich Ushakov-Poskochin.