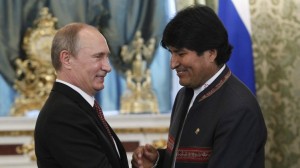 Amnesty International has accused Russian law enforcement agencies of ‘colluding in the abduction, disappearance, unlawful transfer, and torture of wanted individuals.’  NSA whistleblower Edward Snowden has withdrawn his application for asylum in Russia, reportedly in response to Vladimir Putin’s request that he stop leaking U.S. state secrets.  The airplane carrying Venezuelan President Evo Morales home from a gas export meeting at the Kremlin was rerouted yesterday, apparently on suspicion that Snowden was on board.  Venezuelan President Nicolas Maduro, also visiting Russia, was asked whether he would take Snowden home with him: ‘What we’re taking with us are multiple agreements that we’re signing with Russia, including oil and gas.’  He’s referring to the news that oil giant Rosneft has signed a deal with PDVSA, covering a range of joint research and development projects.  The company announced that it has bought the remaining 49% of gas company Itera for $2.9 billion.  Its increase in production in June has led to another post-Soviet output record, whilst output at TNK-BP declined in the first six months of the year.  VTB missed its first-quarter profit forecasts, sparking speculation that Russian banks are suffering from the current economic climate.  State private equity fund, the Russian Direct Investment Fund (RDIF), is to buy a stake in Rostelecom.

Yevgeny Urlashov, United Russia opponent and the current Mayor of Yaroslavl, has been detained on suspicion of extortion.  Regional deputy governor, Marina Kalugina, has been charged with embezzlement and fraud.  A new law to grant amnesty to white collar criminals who pay back stolen funds will come into effect in January 2014.  Acting Moscow Mayor Sergei Sobyanin wants the City Duma to abolish the use of absentee ballots in city elections to curb fraud – but not before the upcoming mayoral election.  Alexander Lebedev has been sentenced to 150 hours of community service after a Moscow court found him guilty of battery.  He plans to appeal.

The Organization for Security and Cooperation in Europe (OSCE) has passed a resolution urging its participating states to ‘resolve differences, disputes, and controversies related to intercountry adoptions’, which although it does not mention Russia specifically is seen as an appeal to the Kremlin to allow U.S.-Russia adoptions to resume.  Four gay rights activists were detained in downtown Moscow yesterday for staging an unsanctioned rally.  North Caucasus insurgent Doku Umarov has urged his followers to prevent the Sochi 2014 Winter Olympics from going ahead ‘on the bones of our ancestors’.  A Russian couple based in Germany have been sentenced to twelve years in prison for espionage.