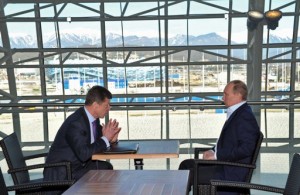 A provincial court has announced that the widely criticised and ‘politically motivated’ trial of Alexei Navalny is to begin on April 17.  RFE/RL reports that the trial may end up leading to a ‘likely preordained’ 10-year sentence, and explains Navalny’s efforts to document his own trial online, sharing as much evidence as possible and urging the public to decide his guilt or innocence for themselves.  The Deputy Prime Minister is alleging that only roughly half of Russia’s employed population work in ‘transparent’ sectors.  New legislation to be signed ‘within days’ by President Vladimir Putin will supposedly allow the government to eliminate corruption in state procurement.  Vladimir Putin is ordering Gazprom to revisit its plan to build a second section of the Yamal-Europe gas pipeline, which had previously been scrapped in connection with Nord Stream.  Such a move would also give Gazprom the upper hand in its current gas dispute with Ukraine by boosting the volume of gas it could transport to Europe.  Gazprom is under investigation by the Federal Anti-Monopoly Service for allegedly restricting competition in pipe supply.

Jailed Pussy Riot member Maria Alyokhina is to be transferred to a new correctional facility after a regional prosecutor’s office found that she was placed illegally in a repeat offenders’ prison.  Art activism goes beyond Pussy Riot, says this report, looking at socio-political art, particularly graffiti, in various regions.  Human Rights Watch is calling on Germany and the Netherlands to pressure Vladimir Putin during his upcoming visit to reverse the ‘erosion of human rights’ in Russia.  Alexei Filatov, a prison guard in Altai, has been given a three-year suspended sentence, despite being found guilty of beating a prisoner to death, prompting a Public Monitoring Commission member to comment, ‘Law enforcement authorities protect their colleagues by any means possible.’  The Russia-led Collective Security Treaty Organization alleges that protest movements in former Soviet republics are funded by foreign states who want to foment political instability.  The Pentagon says that it will continue to buy military transport helicopters from Russia, whose weapons exports increased 12% to $15 billion last year.

If Moscow wants to become a financial center, it ‘has a lot of wooing to do’.  U.K.-based Rockefeller Oil is to acquire $1 billion worth of Russian oil and gas assets from VTB, as the latter’s $3.5 billion acquisition of Tele2’s Russian unit is approved by regulators.  Reuters reports on the development of the oil resource, Bazhenov, which is estimated to contain up to ‘30 years of world supply at current levels’.

An accidental blaze at a 40-story apartment block in Chechyna has been extinguished, leaving no casualties.