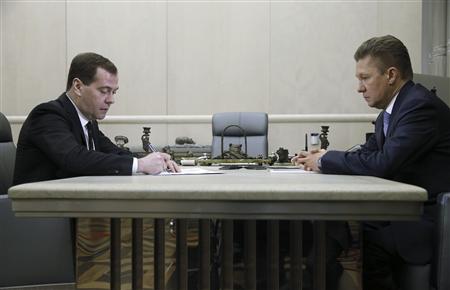 In a move widely seen in the West as politically motivated, Russia has hiked the price that Ukraine pays for its gas for the second time this week, creating an overall price rise of 80%, or $100 more per 1,000 cubic meters.  Prime Minister Dmitry Medvedev justified the action by saying it was in line with Russia’s termination of agreements with Ukraine on the Black Sea Fleet.  Ukrainian Prime Minister Arseny Yatseniuk says the price rise is ‘absolutely unacceptable’, but anticipates that Russia will only continue to raise energy pressures for Ukraine, and eventually begin to limit gas supplies.  Yatseniuk also vowed that Ukraine would retaliate against any Russian aggression: ‘If Russia wages war, we will defend our country’.  A billboard in Ukraine’s Donetsk bids ‘goodbye’ to Russia, in advance of a planned anti-Russian action on April 12.  The head of Ukraine’s security service partially blames Russia for the killing of more than 100 protesters in Kiev in February.  Deputy Foreign Minister Sergei Ryabkov suggested that the U.S. should ‘come to terms with the new situation’ in Crimea by replacing its ‘childish tantrums’ with ‘yoga’.  Russia is on the brink of recession; its economy contracted during the first three months of this year, according to a new survey of purchasing managers, indicating that Russia was experiencing economic troubles before Crimea, and that the current international backlash will only prolong stagnation.

The Crimea crisis is almost certain to be the catalyst that will drive Russia to increase trade with its Asian neighbours.  The Foreign Ministry has lodged a formal complain regarding a German’s minister’s comparison of the Crimea annexation to Nazi policies.  Gazprom’s Alexander Medvedev’s 2007 estimate for Gazprom’s market value was ‘way off’ – by $910 billion, to be precise: ‘[N]o company among the world’s top 5,000 has suffered a bigger collapse in market capitalization than Gazprom.’  U.S. Secretary of State John Kerry says Europe must find a way of weaning itself off of Russian energy imports.  The Economist has some useful data about E.U. member states and their consumption of Russian gas, with Lithuania, Estonia, Finland, and Latvia’s 2012 supplies comprised 100% of Russian exports.  A Russian political scientist has slammed the Parliamentary Assembly of the Council of Europe (PACE) as ‘place where decisions made in Washington are announced’, and concluding that Russia will not face any problems if it withdraws.

Three major music labels are suing social network Vkontakte, claiming that it has deliberately facilitated large-scale music piracy.  JPMorgan says it will process a previously disputed payment from the Russian embassy in Kazakhstan to insurance agency Sogaz, easing tensions that initially had the Foreign Ministry up in arms.  As the result of a decreed signed by the President, international broadcaster the Voice of Russia – formerly Radio Moscow – has ended all shortwave broadcasts, and will merge with a group of other state-run news agencies.