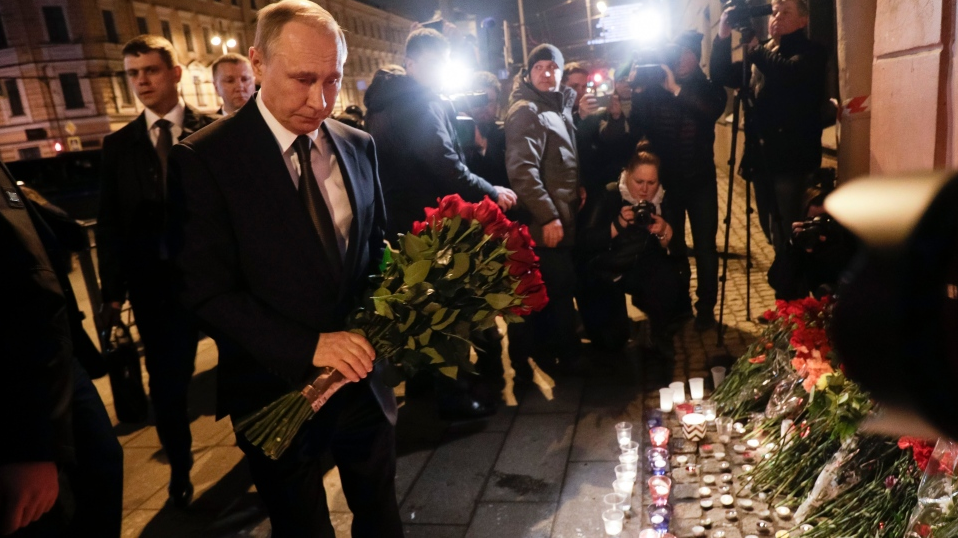 Three days of mourning have been declared in St Petersburg after an explosion in the Tekhnologichesky Institut subway station killed 11 people and wounded 50 yesterday, with another shrapnel-packed explosive device apparently discovered and defused in Vosstaniya Square station in the same city. Barely had the news broken before President Vladimir Putin was on hand to lay flowers at the site, already in the city for meetings with the All-Russia People’s Front and Belarusian President Alexander Lukashenko. Prime Minister Dmitry Medvedev condemned the “terror attack”, and the case is being investigated as such. By author Mikhail Iossel’s analysis, “the Russophone segments of Facebook and Twitter — fairly erupted with confident assertions that this was ‘the regime’s work, a ‘black-flag’ operation undertaken in order to divert public’s attention from the country’s growing protest movement”, and arguing that “[t]he use of terrorist acts to tighten the screws is a national tradition in Russia.” Edward Snowden commented, “The political aims of terrorists are countered when the media highlight the victim rather than the culprit. Show the cost, not the criminal.” The man who placed the second bomb was apparently caught on CCTV, and is currently thought to be from Central Asia. (Search warrants have been issued for two people thought to have been connected with the blasts.) Putin’s meeting with Lukashenko was successful in resolving all of their energy disputes. The President opened their meeting with a statement about the subway bombing, but said nothing about the attack in the ensuing press conference. This is Russia’s first bombing since the public transport bombing in Volgograd in December 2013.

The Lithuanian defense minister says the country is taking Russia’s propaganda efforts “very seriously” in terms of its desire to undermine stability in the Balkans. “Russia is a threat,” he said.”They are saying our capital Vilnius should not belong to Lithuania because between the first and second world wars it was occupied by Poland.” The Lithuanian intelligence service says Russia has the capability of launching an attack on the Baltics with just 24 hours’ notice, which limits NATO’s current options for response. Putin thinks current internet regulations are “sufficient for now”. The International Association of Athletics Federations is attributing its latest round of hacks of athletes’ private medical records to Russian group Fancy Bear. Poland says it has new reason to believe that Russia deliberately caused the Smolensk plane crash that killed President Lech Kaczynski. The head of the Kremlin’s Human Rights Council wants an investigation into allegations of the horrendous treatment and murder of homosexuals in Chechnya.

Economist Joseph Stiglitz writes on the detrimental effect that “illiberal democracy” has on the Russian economy.  The recession is officially over, but continuing economic problems are only going to feed dissent, argues Leonid Bershidsky.  The Washington Post reviews the psychological profile of Vladimir Putin written by Fiona Hill, Donald Trump’s new national security adviser.